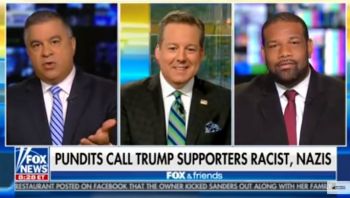 Fox News commentator David Bossie, who is white, claimed Democratic Party strategist Joel Payne, who is black, was “out of [his] cotton-picking mind!”

Payne immediately responded “I’m not out of my cotton-picking mind, you ought to watch your mind.” The Washington Post published a clip from the segment.

Bossie’s remark came after a June 24 Fox & Friends segment in which Bossie and Payne debated the tone of political rhetoric, like comparing people to Nazis. Bossie is the former deputy campaign manager for Pres. Trump.

A Fox News spokesperson said in a statement sent to iMediaEthics,

“David Bossie’s comments today were deeply offensive and wholly inappropriate. His remarks do not reflect the sentiments of FOX News and we do not in any way condone them.”

Alright I just want to address what just happened in that debate. Obviously it got fiery. David Bossie used a phrase that clearly offended Joel Payne, and it offended many others. I don’t know what David meant by it. It went back and forth between the two of them. I’ve known David a long time, I’ll let him address exactly what he said, but I want to make clear Fox News and this show, myself, we don’t agree with that particular phrase. It was obviously offensive, and these debates get fiery. That’s unfortunate. We like to have honest and spirited debates but not phrases like obviously and so I will just leave it at that.

Bossie apologized on Twitter, saying, “During a heated segment on Fox & Friends today, I should have chosen my words more carefully and never used the offensive phrase that I did. I apologize to Joel Payne, Fox News and its viewers.”

In an interview with MSNBC, Payne said he accepted Bossie’s apology, CNN reported.

During a heated segment on Fox & Friends today, I should have chosen my words more carefully and never used the offensive phrase that I did. I apologize to Joel Payne, Fox News and its viewers.