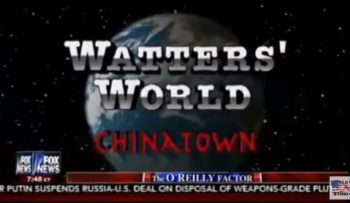 A screenshot from the Fox News segment. (Credit: YouTube)

The Asian American Journalists Association called for Fox News to apologize for a segment that was “rife with racist stereotypes, drew on thoughtless tropes and openly ridiculed Asian Americans.” The segment was supposed to focus on Chinese-Americans’ perspectives of the upcoming presidential election.

“Jesse Watters, O’Reilly Factor Correspondent and Host of Watters World, committed a litany of offenses, from asking Asian American women, ‘Do I bow to say hello?’ to asking an Asian American man if he knew karate. He mixed in stereotypes of various Asian groups, conflating Koreans with Chinese and Japanese communities. The segment used clips of martial arts movies and interviewed Asian Americans whose primary language isn’t English in order to mock them.”

Cheung told iMediaEthics by e-mail, “AAJA reached out to a Fox News representative for comment but has not received a response.”

My man-on-the-street interviews are meant to be taken as tongue-in-cheek and I regret if anyone found offense.

As a political humorist, the Chinatown segment was intended to be a light piece, as all Watters World segments are.

The segment is below, via the Daily Beast.

Cheung called for Fox News to apologize and explain the segment. He wrote, “AAJA MediaWatch demands an apology from Fox News to our community and a meeting with the show’s producers to understand how this segment was conceived and greenlit to air. More importantly,  we want an explanation for how this type of coverage will be prevented in the future.”

iMediaEthics has contacted Fox News for comment and response.