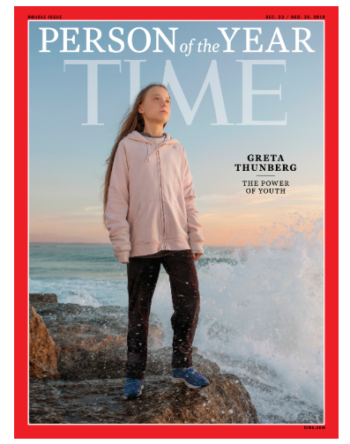 Time Person of the Year cover for 2019 (Credit: Time/Photograph by Evgenia Arbugaeva for TIME)

The Washington Free Beacon, a conservative news site, wrongly reported who Time magazine’s Person of the Year would be.

The Dec. 10 article by executive editor Brent Scher claimed that the whistleblower and impeachment witnesses would be named, but actually they ended up being Time’s Guardians of the Year. Greta Thunberg, the Swedish teen climate change activist, was named Person of the Year.

According to Mediaite, the Free Beacon‘s article with the wrong announcement was “released just hours before” the actual Time announcement.

iMediaEthics has written to Time to confirm the Free Beacon asked for confirmation before publication and if it responded with any information.

In an editor’s note, the Free Beacon noted:

“Editor’s Note: This piece incorrectly stated that the whistleblower and civil servants who testified during impeachment were to be named TIME’s Person of the Year. They were instead named TIME’s “Guardians of the Year,” a new designation in an expanded set of awards granted in 2019.”

In a tweet, Scher wrote, “Got this one wrong,” and added, “My bad everyone.” He also commented, “We knew they were being honored by Time. Just didn’t know others were too this year. Sorry again about the mistake.”

Time magazine’s editor’s letter announcing its person of the year explained that this year it was “expanding Person of the Year” and also naming “the most influential person in a range of fields” like Lizzo for Entertainer of the Year.