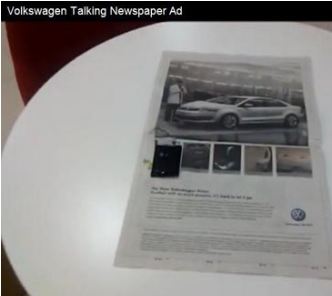 Screenshot detail above from a video demonstrating the talking advertisement published recently in The Hindu and Times of India. (Credit: YouTube, Roy Greenslade's blog)

The latest advertising effort used by news organizations was a hot conversation topic, but also scared and confused readers.

Called “pathbreaking” by The Guardian’s media writer Roy Greenslade, the ads, featured on the back page of a newspaper wrap, included an audio chip, so readers were “talked” to.  The ads – for Volkswagen – were published in The Times of India and The Hindu newspapers.

Business Standard reported that marketing agency Mudra Group came up with the “talking” ad idea and that the audio chip is triggered by light.

Greenslade noted that some “frightened and suspicious” readers called the police in Delhi, India, and that the bomb squad was even brought out in Mumbai after wary readers heard the noises.  “In Mumbai, the bomb squad was called out when people became suspicious of noises coming from discarded newspapers in trash bins,” Greenslade wrote.  Further, a domestic flight was even delayed because of passenger complaints about the talking ad noises.

See Greenslade’s full post and a video clip of the “talking ads” here.