Front-Page Pic of Dead Child : Is it Ethical?

Front-Page Photo of Dead Child: Is it Ethical? 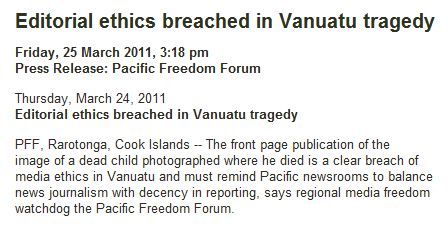 The Pacific Freedom Forum, a media advocacy group for Pacific media, criticized the Vanuatu Times for publishing a photo of a dead child on its March 18 front page. The Vanuatu Times is a weekly newspaper for Vanuatu, an island in the South Pacific.

The color photo showed the child “where he died” and identified him by the name “Kaloran.”  The photo was accompanied by an article reporting that the child “died in an unsecured timber yard premises” and that his family was calling for “compensation.”

The PFF’s chairperson, Susuve Laumaea, called for the newspaper to apologize to the child’s family and the newspaper’s readers.  Laumaea cited media organization’s , Media Assosiasen Blong Vanuatu, code of ethics, which advises media on Vanuatu to “commit to special considerations for coverage of children, and for decency and sensitivity to govern decisions to publish images of the dead.”

“There is a line between sensitive reporting to the issue of preventable deaths, and gratuitous coverage which goes beyond the bounds of decency in any society.  It takes a standard of maturity and courage by newsrooms to admit when the lines have been blurred, and we encourage MAV to ensure its code of ethics is widely accessible in Vanuatu newsrooms to help editors and journalists stand by the excellent codes they’ve initiated.”

StinkyJournalism has written to Susuve Laumaea and Monica Miller for comment and will update with any response.

Also in Vanuatu media, Mark Neil-Jones, the publisher of Vanuatu newspaper the Daily Post, filed a police complaint and a lawsuit threat in mid-March, claiming government minister Harry Iauko and “his supporters” assaulted him in his office.

In response, Iauko stated he intends to sue the Daily Post for defamation and claims the newspaper doesn’t follow journalism ethics, didn’t contact him for contact and won’t report “his side of the story.”

“Threats and acts of violence against a journalist who is just doing his job are unacceptable.  We warn Prime Minister Sato Kilman that his credibility will be questioned if this goes unpunished. We urge the police to carry out an exhaustive investigation without delay and we urge the prime minister to do everything possible to ensure its success. Otherwise he will be regarded as an accomplice to violence by a member of his government.”

Reporters without Borders noted that Neil-Jones was attacked in January 2009 as well.

iMediaEthics has also written to Pasifika Media Association for comment and will update with any response.

Front-Page Photo of Dead Child: Is it Ethical?