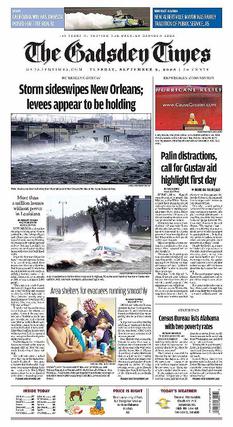 The Gadsden Times, a daily newspaper in Alabama, published an Associated Press headline calling some supporters of U.S. Senate candidate Roy Moore “homophobic.” Now, the newspaper is apologizing for offending readers and saying it would “should never, ever have been published, period, discussion closed.”

“We apologize, publicly and sincerely, to Moore and his supporters, and to anyone else in our audience offended by that language,” the Gadsden Times said.

In a Nov. 20 editorial, the newspaper admitted, “We messed up. Badly. Terribly. Inexcusably. Indefensibly.”  Further, the paper said it received “many” calls about the headline and that the headline prompted claims they were biased. The newspaper said it doesn’t intend to endorse anyone in the election and noted some readers even complained over reporting on the allegations against Moore.

iMediaEthics has written to the Gadsden Times to ask how many complaints it received and if it typically publishes AP headlines verbatim. We’ve also contacted the Associated Press to ask if it stands by the headline.