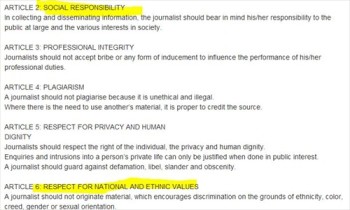 See above some of the articles of the ethics code for the Ghana Journalists Association. (Credit: RJIOnline.org, screenshot)

The National Media Commission’s statement, published here on Vibe Ghana’s website, identified several types of comments that it is concerned about.

The commission also called for Ghana’s government to approve the proposed Revised Broadcasting Bill and noted it is reviewing any “content thought to contain questionable language.”

According to the statement, the commission is concerned that “the peace, stability and unity of Ghana is indeed threatened by some of these pronouncements on air.”

The commission called for “greater circumspection and professional judgment guided by the Code of Ethics of Journalism.”  The Ghana Journalists Association’s ethics code published on the Donald W. Reynolds Journalism Institute’s website doesn’t specifically address use of inflammatory language but does include an article on “social responsibility.”

“In collecting and disseminating information, the journalist should bear in mind his/her responsibility to the public at large and the various interests in society.”

The code also calls for journalists to “respect the right of the individual, the privacy, and human dignity” and to avoid “defamation, libel, slander and obscenity.”  Further, an article on “respect for national and ethnic values” advises against “discrimination on the grounds of ethnicity, color, creed, gender or sexual orientation.”

We wrote in March when the National Media Commission along with the Media Foundation for West Africa, the Ghana Journalists’ Association and the Advertising Association of Ghana announced they will “sanction” broadcasters who fail to follow ethics in reporting on the upcoming December elections.

We wrote to the National Media Commission’s listed e-mail address for more information, but the e-mail bounced back to us.