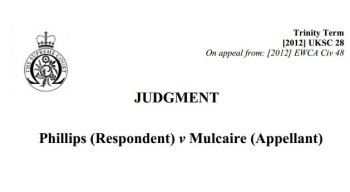 See above a screenshot from the Supreme Court ruling.

The UK Supreme Court has ordered Glenn Mulcaire, the former News of the World private investigator who hacked phones for the now-closed News Corp. paper, to turn over “key phone-hacking details,” such as who at the newspaper asked him to hack, the Guardian and AFP  reported.

As we have written, Mulcaire and former News of the World reporter Clive Goodman were arrested in 2006 and jailed for phone hacking. The Associated Press noted that despite the 40-plus arrests in the UK investigation into “media misbehavior,” Mulcaire and Goodman “are so far the only people convicted of illegal eavesdropping.”

Last July, James Murdoch admitted in Parliament that News Group Newspapers was still paying Mulcaire’s fees and said the company would stop. But Mulcaire successfully sued for the company to continue paying.

The Guardian noted that “Mulcaire has fought a 20-month legal battle not to reveal the details to protect his privilege against self-incrimination.” A separate Guardian article explained that Mulcaire has “challenged” at least three previous court rulings that sought this information.   Read the July 4 Supreme Court ruling here.

Mulcaire issued a statement about the ruling that said that he “will comply with the supreme court’s ruling to answer questions in Ms Phillips’s case.”