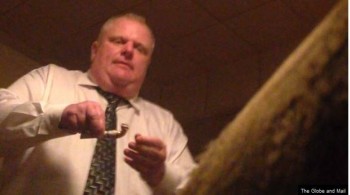 Canadian newspaper The Globe and Mail paid a “self-professed drug dealer” for images of Toronto mayor Rob Ford smoking what appears to be a crack pipe.

Globe and Mail reporters Robyn Doolittle and Greg McArthur reported last night about seeing a video clip of Ford “taking a drag from a long copper-coloured pipe, exhaling a cloud of smoke and then frantically shaking his right hand.”

The Globe and Mail,  which is based in Toronto, admitted it wasn’t positive what was in the pipe. The story reported that the drug dealer said he took the video last week and wanted to sell it for “at least six figures.”  The Globe and Mail said in its story it didn’t buy the video but did purchase some still images for its report.

About half-a-dozen photos are published on the Globe and Mail’s website.

iMediaEthics asked Globe and Mail reporter Doolittle by e-mail how much the newspaper paid for the images, why it bought the images and not the video, and why it decided to pay the drug dealers.  Doolittle pointed iMediaEthics to Globe and Mail editor-in-chief David Walmsley’s May 1 editor’s note about the coverage.

Walmsley said the newspaper bought the images for “$10,000” because of the public interest.

Walsmley pointed to the importance of reporting on the mayor of such a big Canadian city and his drug use. He wrote:

“Toronto is the financial capital of this G8 country and the sixth-biggest government in Canada. Paralysis in Toronto is bad for the country. The mayor is supposed to be the guardian of his city. The photographs we published are a price worth paying.”

While Ford didn’t comment about the video, he did announce he is going to get “immediate help.”  Ford released a lengthy statement saying, “I have a problem with alcohol, and the choices I have made while under the influence. I have struggled with this for some time.”

“Today, after taking some time to think about my own well-being, how to best serve the people of Toronto and what is in the best interests of my family, I have decided to take a leave from campaigning and from my duties as Mayor to seek immediate help,” he added. “I have tried to deal with these issues by myself over the past year. I know that I need professional help and I am now 100% committed to getting myself right.”

Even though the Globe and Mail didn’t buy and publish the video, it described what it showed in detail.

Last year, the Toronto Star paid $5,000 for a video of Rob Ford apparently drunk and ranting about how he was ‘gonna kill that f–king guy,” as iMediaEthics reported at the time. Star public editor Kathy English said the payment was not checkbook journalism and instead akin to paying a license fee for the footage.

Separately, U.S. gossip website Gawker crowdfunded $200,000 to buy a video of Ford apparently smoking crack cocaine, a video that both the Toronto Star and Gawker saw. But, when Gawker finally raised the money, it couldn’t track down the video seller, so the video didn’t come to light. The Toronto police later recovered what it said was the same video.