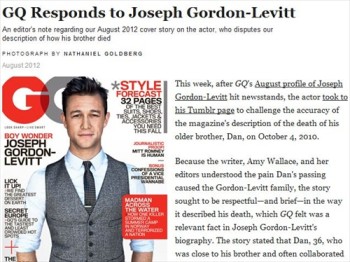 GQ defended its reporting after actor Joseph Gordon-Levitt called out the magazine for reporting what he says is “factually incorrect” information about the death of his brother in a cover article on Gordon-Levitt.

In a Facebook post, Gordon-Levitt had thanked the magazine for the August 2012 issue’s article but criticized GQ for writing that his brother “died of an alleged drug overdose in 2010.”

As Gordon-Levitt wrote in his response,

“Using the word ‘alleged’ technically allows the writer to say whatever she wants. The ‘allegations’ to which she must be referring were made by a handful of gossip websites. They are factually incorrect according to the coroner’s office and the police department. I don’t like publicly speaking about my brother’s death, but I’m making an exception to correct this irresponsible claim.”

GQ issued a statement on its website in response to Gordon-Levitt’s claims of error, writing

“The magazine stands by its reporting, the facts of which are fully supported—and have been confirmed in detail—by the Los Angeles County coroner’s office.”

The magazine also wrote its “story sought to be respectful—and brief—in the way it described his death, which GQ felt was a relevant fact in Joseph Gordon-Levitt’s biography.”

E! Online explained that “Ketamine’s medicinal use is as an intravenous or intramuscular anesthetic, but taken recreationally it’s said to have a similar effect to PCP. It can cause elevated blood pressure and hallucinations.”

We have written to the Los Angeles County Coroner’s department, Gordon-Levitt’s site and GQ for comment and will update with any response.