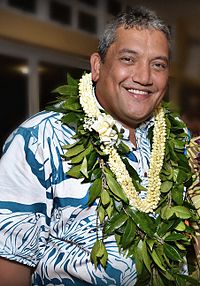 The Honolulu Civil Beat published a video of Hawai’i Island Mayor Billy Kenoi giving a “profanity-laced toast” that showed him “acting like a buffoon.”

“Some readers” complained about the Civil Beat publishing the video, arguing that Kenoi thought he was in private. Kenoi’s comments were made at the annual conference of the Hawaii Congress of Planning Officials held at a local hotel.

The Civil Beat‘s public editor Brett Oppegaard compared the matter to that of media coverage of the late Toronto mayor Rob Ford. That is, Kenoi is a public figure embroiled in a separate, possibly criminal, legal case and, as such, his public behavior is newsworthy.

The Civil Beat‘s justification for publishing the video is tied to a scandal in which Kenoi is alleged to have used a county purchasing card to buy items unrelated to his office, including alcohol, a bicycle, and a surfboard. Kenoi is charged with “two counts of second-degree felony theft, two counts of misdemeanor theft, three counts of tampering with government records and one count of making a false statement under oath.”

Oppegaard told iMediaEthics, “Kenoi has not complained to me, and I don’t have a specific number of people who complained to CB, although you can see some of those in the comments sections.”

In his public editor’s column, Oppegaard explained that “this should be considered a public event,” and noted that Kenoi “clearly identified himself as the mayor of Hawaii. With all of those factors combined, Kenoi should have had zero expectation of privacy.”

“Maybe a bigger question, then, is was this particular video worthy of publication?” continued Oppegaard. “It basically just showed Kenoi acting like a fool, not a criminal. Some people have been moralizing about this case, but I recommend really thinking carefully about what he did here. He said a few profanities. He acted like an idiot. His friends shushed him, and then he shut up. He didn’t hurt anybody. He tried to give praise to others. He didn’t do a particularly good job of expressing himself.”

“Without the legal issues, I think the argument would be very difficult to make that one drunken toast is newsworthy. With the legal issues, though, they raise questions about his competency as a public leader and the potential interference alcohol might have in the execution of his duties. Rob Ford, former mayor of Toronto, provided an example of how a story like this can develop and evolve through such incremental reportage.”

In a previous column, Oppeggaard looked at “Kenoi’s legal defense strategy of blaming the media for his trouble.”
iMediaEthics has written to Kenoi for comment.