Horrible Olympic Photojournalism Portraits: Why Photoshop is NOT the Cure

Horrible Olympic Photojournalism Portraits: Why Editors, Not Photoshop are the Cure 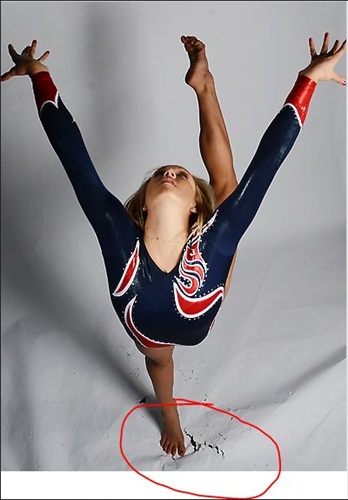 See above one of Joe Klamar's Olympic portraits. Klamar's photos are being criticized for not hiding any physical flaws. Note the torn background paper below the gymnast's foot. (Credit: Joe Klamar/CBS, screenshot)

An online drama has been brewing among professional photographers and photo buffs involving some not so flattering portraits of the US Olympic athletes taken by Joe Klamar. That “drama” has now gone viral.

Originally published in an online slide show by CBS News, the images were widely criticized on Reddit and have since been picked up by countless blogs, Twitter feeds and news sites.

Criticism of the work has sparked a likely unintended but interesting debate about photography and its use in media.

The photographs are poorly lit, the paper backgrounds are shoddy and torn, and the athletes are frequently shown with their physical flaws not just visible but highlighted; bumpy, sweaty skin, wrinkles and pallid flesh are the order of the day.  The public is accustomed to a more slick and perfected photograph of their Olympians.

Compare Klamar’s above photo with Time magazine’s 2004 cover photo of Phelps, below.

Many of the complaints about the photographs from the public also came with the recommendation that some liberal use of Photoshop could have saved many of the images if the photographer or editors had had the time or inclination to avail themselves of it.

“Even with the paper ripped there is always PHOTOSHOP to correct those problems,” writes commenter Mary Smith on the PetaPixel.com blog.

Another reader, “Halfrack,” is quick to point out that journalists “can’t photoshop or alter the images in any way. This is where portrait photographers and news photographers are VERY different.”  Photoshopping news photos beyond minor color corrections is a major ethical violation in the photojounalism business.

Slate chimed in with its own sort of defense of Klamar.  In the July 4th article, Slate photo editor Heather Murphy discussed ethical limitations placed on photojournalism–and using Photoshop is NOT the answer.

“The idea that the photo editors who worked for AFP or Getty should have used the powers of Photoshop to buff out those ugly wrinkles and rips reveals a misunderstanding. Unlike the editorial photographs commissioned by magazines—like, say, a photo you might see on the cover of ESPN the Magazine, photographs released on newswires are not supposed to be dramatically altered.”

The general public seems largely unaware of the rules of photojournalism that prohibit anything except the most basic adjustments to exposure and color in a photograph.

Perhaps this is because stories of faked and Photoshopped images are anything but rare in the news. Perhaps it is because the news media benefits from having a public that does not understand the specifics of what is ethical.  The media needs to make efforts to educate the public on what should be expected and demanded of journalism so that the public and more easily hold them accountable.

Editors are to Blame

The article goes to say that some or all of the blame for these terrible images falls on the editors who chose to publish them.

Klamar may not have been given a choice, given the way that the photography business now works. Once a news photographer has finished shooting, the editors of the news outlet who hired him or her, often require the photographer to send ALL the photos from a shoot. When shooting for an agency like Getty, the photographer often does not even own the copyright for the photographs they are taking and has no control of those images.Therefore, the choice of running a specific image, or no images at all, was not likely Klamar’s, depending on his contract. iMediaEthics is contacting Klamar asking about this and will update with response.

Klamar: “I Work for a News Agency and I Wasn’t Taking Pictures for a Nike Ad”

Klamar responded to the controversy over his photos in an interview with the AFP.  According to his comments, Klamar didn’t know he wouldn’t be taking pictures in a studio.  Klamar is quoted as saying:

“I was under the impression that I was going to be photographing athletes on a stage or during press conference where I would take their headshots for our archive.”

He also noted that he “really had no idea that there would be a possibility for setting up a studio” and that “it was very embarrassing to find out that I wouldn’t be able to take advantage of a studio.”

Klamar also touched on the criticism of the lack of polish in his photos, too.  Klamar reminded that: “I work for a news agency and I wasn’t taking pictures for a Nike ad.”

The publication of these photographs may have been a questionable career choice for Joe Klamar (some say there is no such thing as bad publicity but its effects remain to be seen) and, despite the aesthetic and technical failings of the photographs, Joe Klamar’s Olympic portraits are examples of what should be the gold standard of ethical photojournalism.

London Shearer Allen is a photojournalist. Her ethical stance on photo editing is as follows:

I began working as a photojournalist before digital photography was the standard. I began my journey as a photographer with film cameras and darkrooms.  My ability to alter the photographs I took was limited to what one could do in a darkroom, cropping the image and adjusting contrast and tone. Doing anything more, such as putting two images together or editing out an unwanted element, would have been not only unethical but a difficult and lengthy process that would hardly be worth the effort. Today, digital photography and programs like Photoshop have made all of these processes easier, for good and for ill.  Although I have since switched to digital photography, I have maintained the same set of rules of what is ethical. I treat Photoshop like a darkroom. Just because it is now possible to edit the rips out of a background, remove a blemish or remove a whole person who mars an otherwise fantastic shot does not mean it is fine to do.  Perhaps having a history with old-fashioned photography gives me an advantage in knowing what is okay and what is not or perhaps it is easier because in my heart I am still a film photographer and miss those earlier days.

Horrible Olympic Photojournalism Portraits: Why Editors, Not Photoshop are the Cure