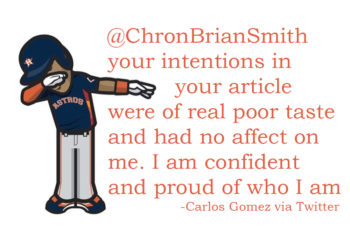 The Houston Chronicle apologized after upsetting Major League Baseball player Carlos Gomez with quotes the newspaper attributed to him.

In the May 4 article, “Carlos Gomez knows he’s a disappointment to Astros fans.” sports columnist Brian T. Smith quoted the Dominican-born player as saying, “For the last year and this year, I not really do much for this team. The fans be angry. They be disappointed,”

Gomez complained, tweeting tweeted that he thought the writer’s “intentions” were in “poor taste.”

@ChronBrianSmith your intentions in your article were of real poor taste and had no affect on me. I am confident and proud of who I am.

Gomez told ESPN that he thought the reporter intentionally insulted him. “That person knew exactly what he was writing, and he did it intentionally to ridicule me,” Gomez said.

He added, “With all due respect to what [reporters] do, they deserve respect, but people like him who want to f— with you because they can f— with you, they should be suspended or fined, just as someone on TV is fined who says something inappropriate.” Gomez called on reporters to “perfect and polish our words.”

“That is your job. My job is to express myself,” he added, commenting he thought the reporter was mocking him and discriminating, especially since he was trying to speak English.

The Chronicle‘s editor Nancy Barnes apologized “for any offence that was taken,” Journal-isms reported. Barnes said:

“With regards to quoting Carlos Gomez: We sincerely apologize for any offense that was taken. Our writers are encouraged to adhere to AP style rules, which are quoted below. I reviewed the rules myself after this arose and found the guidelines on quotes to be less than adequate for a community like ours, full of immigrants from all over the world, and for whom English is often a second language. I’ve asked some top editors to review this policy, research best practices, and recommend guidance for all of our writers in the future. We always want to be respectful of those we are interviewing.”

The AP standards say in part that journalists shouldn’t “alter quotations, even to correct grammatical errors or word usage. If a quotation is flawed because of grammar or lack of clarity, the writer must be able to paraphrase in a way that is completely true to the original quote. If a quote’s meaning is too murky to be paraphrased accurately, it should not be used.”

iMediaEthics has written to the Chronicle and Smith for comment. 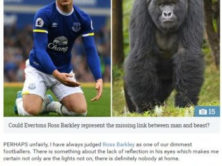 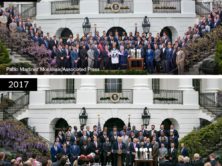