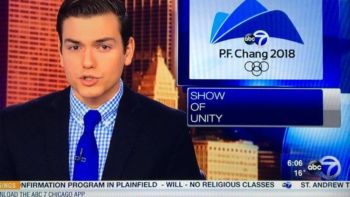 Chicago ABC-affiliate WLS-Channel 7 used a graphic that said P.F. Chang in an on-air report on the Winter Olympics in PyeongChang. P.F. Chang’s is a Chinese and Asian food chain restaurant.

WLS’s spokesperson Jayme Nicholas told the Chicago Tribune the graphic made it to air by accident and that the graphic was really for a “satirical piece” about made-up Olympic sports that sports anchor Mark Giangreco was working on.

iMediaEthics has written to WLS to ask if the satirical piece ever aired and how WLS learned of the mistake.

Last year, WLS suspended Giangreco after he tweeted that Pres. Donald Trump is a “cartoon lunatic.”

Pyeongchang is a mountainous county 110 miles southeast of Seoul, South Korea. It’s the host of the 2018 Winter Olympics.

P.F. Chang’s is an Asian-inspired US restaurant chain.

I know they both begin with the letter P and end in “Chang,” but they have little in common WLS-Ch.7 pic.twitter.com/lfccAppVnY