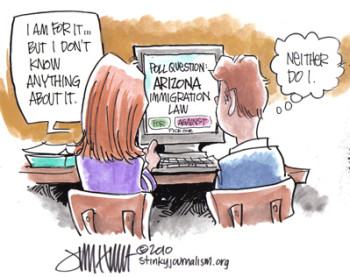 Pollsters around the country are asking if voters are for or against the new Arizona immigration law. Problem is, a lot of people don't actually know that much about the law.

The Rasmussen poll was one of the first out, telling us that 60% of voters nationwide favored the new law, with just 31% opposed.

Next, Gallup declared April 29 “More Americans Favor than Oppose Arizona Immigration Law”.  Then came the CBS/New York Times poll letting us know that a majority (51%) of Americans thought the Arizona was “about right” plus another 9% who believed it didn’t go “far enough.”

NBC News and the Wall Street Journal arrived at an even bigger majority 64%.

Not to be outdone, the latest numbers from the prestigious Pew Research Center For The People & The Press proclaim:

“The public broadly supports a new Arizona law aimed at dealing with illegal immigration and the law’s provisions giving police increased powers to stop and detain people who are suspected of being in the country illegally.”

But is this public opinion case already closed? Are a majority of citizens really in favor of the recently passed Arizona immigration law and/or one or more of its ostensible provisions? Or do these poll numbers represent not much more than a premature, artificial majority created by the way in which the pollsters ask their questions and get respondents to manufacture opinions on the spot?

Accurate poll results are politically significant for the public and for the President and the Congress to chew on before next November’s election and taking on the daunting task of reforming federal immigration law.

Not surprisingly after being primed by several preceding questions, roughly 6 out of 10 (59%) told Pew they approved of the new law, with only 32% disapproving and just 8% volunteering “Don’t Know” -or “no opinion.”

So is that the end of the story? With American public opinion supposedly so fully in support of Arizona’s new law, Congress, the President and all the powers that be better get cracking on some strong federal legislative initiatives before they get run out of office by the citizen majority.

Well, not so fast. Lost in the blizzard of polling numbers these past few weeks were some other, somewhat muted numbers that suggested lots of Americans really don’t know enough about the Arizona law yet to have even made up their minds on the issue.

Fox News, for example, with their polling partner, Opinion Dynamics asked a national sample of registered voters not only whether they favored or opposed the new Arizona immigration law, but also gave respondents the explicit and honest opportunity to admit they didn’t “know enough about it to say.”

Guess how it turned out?  Noticeably, lots of Americans (45%) said they didn’t know enough about it to express an opinion.

So the real story of public opinion on immigration, right then and there, was revealed as one of pluralities, not a simple majority for mass consumption as had been consistently and wrongly reported: with 34% in favor, 21% opposed, and a sizable plurality (45%) not yet informed enough to say where they stood.

But pluralities evidently don’t make sensational or even exciting news copy. So Fox, in the very same poll, went on to produce a majority after majority in one question after another, by selecting to drop the explicit and honest, no opinion option, putting the onus on respondents to volunteer a “don’t know” or “unsure” response—a common, but distorted way of measuring public opinion.

The Gallup team took the same path in their immigration law poll. Even though they had discovered that a significant plurality of Americans admitted that they had heard or read “not much” (20%) or “nothing at all” (21%) about the Arizona law, they plowed ahead anyway and said to respondents, including those who said “not much”:

“Based on what you know or have read about the new Arizona immigration law, do you favor or oppose it?”

This Gallup poll lets poll takers admit if they haven’t heard about the poll, but it doesn’t ask if poll takers have read or even understand the law. (Credit: Gallup)

Didn’t Gallup or any other one of the polling companies ever think to ask respondents what they actually know or claimed to have read about the law?

In any case, this Gallup opinion-production question got 39% to say they favored it, with 30% opposed and the “not heard/no opinion” category down to 31%.

Not wanting to leave well enough alone in their quest for a newsworthy majority, Gallup goes on to tell us that among those who claimed to know something about the law—including the “not-muches”—or had heard of it, a majority of them (51%) favored it.

Why would Gallup ask if poll takers who haven’t read or don’t know much about the law favor or oppose the law?  (Credit: Gallup)

Apparently, the way big media sees it, politicians, policymakers and political pundits like to have a clear and unambiguous majority fed to them through polls, and the pollsters readily give’em.  “Majority rule” is so deeply ingrained in our democratic society that it permeates our measurements, interpretations, and analyses of just about everything. We want it even if  it does not exist.

The CBS/NYT poll generated their majority (51%) with that old presumptive lead-in (emphasis mine): “As you may know, the state of Arizona recently passed a law that gives the police the power to question anyone they suspect is in the country illegally, requires people to produce documents verifying their status if asked, and allows officers to detain anyone who cannot do so. Do you think this law goes too far in dealing with the issue of illegal immigration, doesn’t go far enough, or is it about right?”

The NBC News/Wall Street Journal poll did an even better job of manufacturing a majority (64%) by force feeding the respondent on the new law with no explicit opportunity to plead ignorance or uncertainty:

“The Arizona law makes it a state crime to be in the U.S. illegally. It requires local and state law enforcement officers to question people about their immigration status if they have reason to suspect a person is in the country illegally, making it a crime for them to lack registration documents” [again, not an accurate description of what the law actually says]. Just 2% –repeat, just 2%—appeared to have “no opinion” in the face of this short course in criminal justice.

An AP-GfK poll done at nearly the exact same time, however, reveals that 42% of American adults admitted having read “little” or “nothing at all” about the new Arizona law.

Of course, if you goad them into giving an opinion, most people can probably come up with an answer based on some gut-level reaction to “illegal immigrants.” But that doesn’t mean they think they know enough about the substance or specifics of the Arizona law yet to express an opinion on it.

Policymakers and pundits, however, will typically take such results about “what the majority thinks” at face value.

And therein lays the danger of “majority rule by polls.”

Which Poll Majority to Rule?

So what are we to learn from all these conflicting polls: that the great majority of Americans has already made up their minds on this emergent issue?

Or are we to believe that awareness, knowledge and opinion are still very much in a formative stage for a sizable plurality (40-50%) of USA residents?

Do Americans and the powers that be require artificial statistical majorities for virtually every media poll released?

The question then becomes: Can polling companies and media outlets report  more ambiguity, plurality and complexity as issues emerge and evolve over time, and still keep the public interested and thus allowing opinions to be formed, and not forced as they are now?

Ever since George Gallup began taking the “pulse of democracy” and producing his polling majority referendums in the 1930s we’ve been constructing and reaffirming the existence of Western, cultural bias that likes clear cut majorities with the way pollsters ask survey questions. Sadly, the Arizona immigration law is just the latest example.

Next time you read any media poll, just remember: Public opinion is not just about manufactured majorities.  A simple question giving participants an out—to admit they “don’t know”– may reveal the majority opinion you are reading about everywhere is in great doubt.