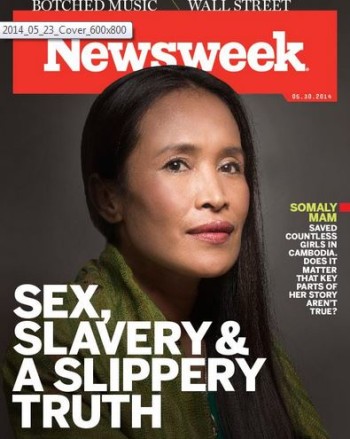 A Newsweek cover story claimed that two women, Somaly Mam and Long Pross, faked portions of their stories of being sex slaves in Cambodia.

This claim of fakery impacts the women sources and the New York Times, whose columnist Nicholas Kristof called one of the women a “hero.”   In response to Newsweek‘s debunking, The New York Times has since placed editor’s notes on stories about the women and, further, Kristof has written a column explaining what happened and answers questions about his reporting. The Times noted that both women deny the claims.

The May 21 story, “Somaly Mam: The Holy Saint (and Sinner) of Sex Trafficking,” raised questions about a woman named Somaly Mam, who has gained worldwide fame based on her advocacy to end sex trafficking and her personal story that she is a former child sex slave, and the story of another woman, Long Pross, who claimed her eye was gouged out by a pimp.

“Mam claims to have rescued thousands of girls and women from sex trafficking, a dangerous and formidable feat. Her story becomes even more inspiring when you hear her shocking tale of being sold into sexual slavery”

Newssweek then asks “She has done so much for so many, does it matter that key parts of her story aren’t true?”

The magazine noted Mam “declined to be interviewed by Newsweek for this article.”

The Newsweek article also challenged Long Pross’s story by making a counter-claim that Pross didn’t have her eye gouged out but instead had to have her eye removed because of a nonmalignant tumor.

As context for the possibility of fabricated stories, Newsweek cited the case of Meas Ratha, who was affiliated with Mam. Meas Ratha said she was sold to a brothel as a sex slave; however, she later admitted to making up the story.

The story doesn’t end with these admissions.

There was still the matter of New York Times columnist, Nicholas Kristof, writing about these women and their backstories. Times readers wrote in, wanting to know what he planned to do about Newsweek‘s claims.

On June 2, Margaret Sullivan, the Times public editor, addressed reader concerns about Kristof’s previous coverage of Somaly Mam and Long Pross, and noted that Kristof wrote a couple of paragraphs about the controversy.

Kristof told Sullivan he wasn’t “certain what the truth is” after the Newsweek story. Further he thinks “Somaly genuinely helped free underage girls imprisoned in brothels” and that it’s hard to verify certain details like “ages, names and histories” when reporting “in the developing world.”

Kristof also published a three-paragraph blogpost about the questions regarding Somaly Mam. The June 2 blogpost said,

“Somaly stands by her story, but she also resigned, which gives credence to the allegations. I’m wary because the source of some of the allegations is her ex-husband, with whom she is feuding and who previously had confirmed her account.”

But that wasn’t enough for readers.

They again wrote to public editor Sullivan questioning why Kristof’s comments were limited to his online blog and not in print. Sullivan also commented that Kristof’s initial response was lacking. “Both in tone and conclusions, Mr. Kristof certainly could have gone further,” she wrote.

Kristof did end up writing a column about the deceit and the Times added editor’s notes to a previous stories about the pair.

His June 7 column, “When Sources May Have Lied,” detailed how he had covered Somaly Mam — with a 2008 column and “several references to her after that” — and noted that numerous other outlets covered her and her work.

Kristof explained to readers about the accusations of fabrication against Mam and Long Pross and that both maintain their accounts are real. After researching the accusations against them and their accounts of events, Kristof concluded: “I didn’t find anything definitive, but I think Newsweek makes a strong case. ”

Despite that, Kristof vowed to not cover them anymore. “The bottom line though is that I would never write about Somaly or Long Pross now,” Kristof wrote.

Kristof said he never encountered any evidence in his previous research that gave him any reason to disbelieve them. He wrote:

“So if we were all hoodwinked, how did that happen? Were we cavalier? I can’t speak for others, but before writing about them I saw Somaly and Long Pross at work in Cambodia, interviewed them at length on multiple occasions, had them take me to sites in their past, and talked to aid workers, diplomats, doctors and even brothel owners. No questions about their stories arose.”

Kristof said in conclusion, “Sorting out the facts will take time, and we may never know for sure what is true or false in Somaly Mam’s past. I now wish I had never written about her, given my doubts, and I assume the same is true of The Washington Post, CNN, Time and other news organizations. But I also hope that people will be as diligent in covering the scandal that is human trafficking as the (likely) scandal of false or embellished backstories.”

The New York Times has since appended an editor’s note to Kristof’s January 2009 op-ed article about Long Pross, describing her a girl whose “brothel owner gouged out her right eye” and was being helped by a woman who was “rescued” by Mam.

The June 3 editor’s note on the article, “If This isn’t Slavery, What Is?” states:

“This column reported the story of Long Pross, who said that she was forced to work in a Cambodian brothel, where a pimp gouged out her eye. A Newsweek article has raised fundamental doubts about her story, citing medical records showing that a surgeon removed her eye because of a nonmalignant tumor. Long Pross denies that account.”

There is also an editor’s note on a Nov. 12, 2011 article by Kristof titled “Fighting Back, One Brothel Raid at a Time.” That June 3 editor’s note reads:

“This column included the story of Somaly Mam, who said she was sold into Cambodian brothels as a young girl before escaping years later. A Newsweek article raises doubts about those assertions. Somaly Mam denies the accusations, but has resigned from a charitable foundation she co-founded.”