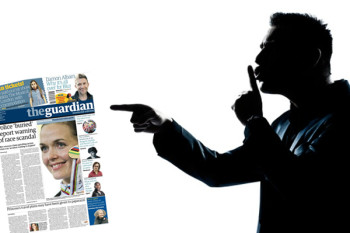 HSBC stopped advertising with the Guardian because of its negative news coverage about the bank and accusations that HSBC Swiss bank was being used  by tax evaders.

“HSBC decided to put its commercial relationship with the Guardian on pause,” the Guardian told iMediaEthics by e-mail.

Dozens of news outlets reported earlier this month, based on leaked files from 2005 to 2007, that HSBC in Switzerland was involved in hiding money from taxes. The Guardian reported: “On Monday, the Guardian, the BBC, Le Monde and 50 other media outlets reveal that HSBC’s Swiss banking arm helped wealthy customers dodge taxes and conceal millions of dollars of assets, doling out bundles of untraceable cash and advising clients on how to circumvent domestic tax authorities.” For more on the allegations against HSBC, check out the Guardian‘s timeline on the HSBC files.

The Guardian also disclosed the “pause” of HSBC’s advertising in a Feb. 17 story about the resignation of Peter Oborne.

The Guardian disclosed in this February story that HSBC bank put its advertising “on pause” with the newspaper. (Credit: Guardian, screenshot)

Related to this dispute, the Daily Telegraph chief political correspondent Oborne publicly resigned this week. He accused the newspaper of not covering the recent allegations against HSBC because of fear over losing the bank as an advertising client, as iMediaEthics previously reported.

Back in 2012, HSBC stopped advertising for a year in the Telegraph because of critical coverage, Oborne also claimed.

The Telegraph vigorously denied Oborne’s claims, but announced it is setting up guidelines for the ethical separation between the newspaper’s news and advertising departments.

In the meantime, Oborne wants the Telegraph to have an independent review about the division between advertising and editorial.  “They need to come out and explain what were the editorial guidelines being used which justified that HSBC story,” Oborne told the UK Today show.

“The Telegraph must now call an independent review,” Oborne said.

The Guardian‘s full statement about the advertising “pause” reads: “During the course of editorial discussions between Guardian journalists and HSBC’s lawyers, HSBC decided to put its commercial relationship with the Guardian on pause – a decision which, to the best of our knowledge, still stands.'”