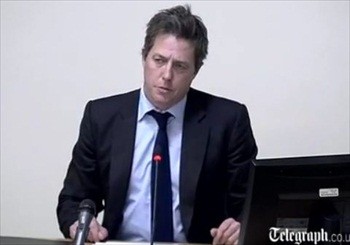 Actor Hugh Grant accused the UK Mail on Sunday of hacking his phone during the Leveson Inquiry, the Hollywood Reporter reported.

During his Nov. 21 testimony he “gave details of what appeared to be a large number of incursions into his privacy.” He accused of the press of having “no mercy” and “no ethics.”  While the accusations that News International-owned and now-closed News of the World hacked phones and bribed prompted the inquiry, Grant accused the Mail on Sunday, the Daily Express and News International-owned The Sun of various ethical violations.

Specifically, concerning the Mail on Sunday, Grant claimed the newspaper’s story alleging he had an affair with “a plummy-voiced English executive from Warner Brothers,” claims Grant denies.  (The Los Angeles Times noted that Grant “successfully sued for libel” over this story. The Washington Post noted that Grant “didn’t produce any hard evidence” to support his accusations.) According to the Guardian, the story was published in 2007.

However, the Mail on Sunday denies Grant’s accusations of hacking, calling them a “mendacious smear.” The Mail claimed a freelance journalist familiar with Grant’s girlfriend at the time (Jemima Khan) told it about the alleged affair, the Guardian reported.

Khan denied this accusation, the Guardian’s live blog noted.  Khan tweeted “The “source” close to me must be psychic.The MoS claim that he/she gave them a story I knew nothing about till it was in the paper. #Leveson”

The Mail also denied Grant’s claims that the newspaper used a hospital source to report on the woman who recently had Grant’s baby, claiming that the Mail got the story “AFTER the birth” and “behaved with total journalistic propriety” in reporting.  Grant got a court injunction to protect the woman and the baby’s privacy, according to the Guardian.

Grant suggested that the only way the press could have known about the baby was if the hospital told them because the only people who knew — his cousin and the woman’s parents “who spoke no English — wouldn’t tell the press.  Further, Grant claimed, according to the Guardian’s live blog, that the Daily Mail “seemed to have all the details” about the woman and the baby, including the pseudonym she used at the hospital.

The Mail instead claimed “a source in his show business circle” told the newspaper about the baby, the Guardian reported.   According to the Sydney Morning Herald, Grant claimed he “missed the birth of his child” because he didn’t want to “draw attention to a girlfriend.”

Grant claimed that the Daily Mail “offered an ex-lover” of the mother of his baby “nearly $200,000 to sell private photos of Hong,” the Washington Post reported.

Grant also claimed that the Daily Express and the UK Sun “illegally accessed his medical records earlier this year after he ended up in the emergency room following a dizzy spell,” according to the Washington Post.

Grant noted that he’s “given only two interviews to the British press in 17 years,” indicating that he sought privacy and not media attention.

Further, Grant noted that while “we all have that interest” in some of the personal stories about people, the media shouldn’t be allowed to invade privacy to give those stories.

The family of Milly Dowler, the murdered teenager whose phone was hacked by News of the World in 2002, also spoke at the inquiry Nov. 21.  As we’ve written, some of Dowler’s voicemails were deleted after Dowler went missing, which reportedly gave the family “false hope” she was alive.  The Guardian’s revelation that the newspaper hacked the phone led to its July closure.

Her mother is quoted by the Guardian as remembering her reaction to the deleted voicemails: “She’s picked up her voicemails, Bob, she’s alive.”

Dowler’s parents indicated that their phones were hacked as well, because the News of the World knew about a “private walk” the couple seemingly arranged on their own phones.

Dowler’s mother, Sally Dowler, is quoted by the Sydney Morning Herald as saying that the press’s coverage “felt like such an intrusion into a really private grief.”

The Washington Post noted that Glenn Mulcaire, who has previously been convicted and jailed for hacking phones, “issued a statement through his lawyer denying that he was the one who deleted messages on Milly Dowler’s phone.”