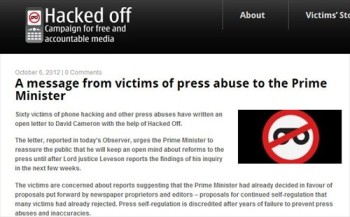 “Sixty victims of phone hacking and other press abuses…with the help of Hacked Off” called on the UK prime Minister David Cameron to serve the “public interest” and “consider the recommendations of Lord Justice Leveson,” who led the Leveson Inquiry into press standards and practices.

The Hacked Off Campaign, a project of Media Standards Trust, “was founded to campaign for a public inquiry into illegal information-gathering by the press and into related matters including the conduct of the police, politicians and mobile phone companies,” according to its website.

Singer Charlotte Church, actors Hugh Grant and Jude Law, former F1 head Max Mosley, author JK Rowling are among the signatories of the letter, who collectively identified themselves as “individual victims of the unlawful and unethical conduct of the press” through “phone hacking, industrial scale data-mining, blackmail threats, and harassment.”

The letter explains that the group had been satisfied with Cameron’s “expression of regret at what had happened” and his comments at the inquiry and at the House of Commons, which included calling “some of that evidence” from the phone hacking scandal “incredibly shocking.”

But, the letter is in response to “widespread reports in the press” indicating Cameron would be opposed to state press regulation in favor of self-regulation.  The group of victims called for Cameron to give “reassurance that:  1) contrary to the reports which we refer to above, you will consider the recommendations of Lord Justice Leveson with an open mind; 2) you have not already decided in favour of a proposal for continued self-regulation – which we believe to be unsatisfactory; 3) you will proceed on a cross-party basis, and 4) that you stand by what you said at the Inquiry.”

In the Hacked Off Campaign’s press release on the letter, its director Brian Cathcart explained “The victims of press abuse who signed this letter are alarmed that, before Lord Justice Leveson has even had the chance to report, it is reported that his proposals will be rejected. It is hard to believe that the prime minister, who, after all, set up the inquiry, could really have taken such a decision. The judge has spent a year investigating press culture, ethics and practices; his recommendations, when published, surely deserve to be considered with open minds and with the greatest seriousness.”

ITV News reported that Cameron said Oct. 7 he doesn’t “want to prejudge” and that “We do need to address the situation, the status quo is not acceptable. We’ve got to have a regulatory system that works for ordinary people, but we have to wait.”

Cameron also said: “We don’t want heavy-handed state intervention. We have got to have a free press. They have got to be free to uncover wrongdoing, to follow the evidence, to do the job in our democracy that they need to do.”

According to the BBC, Leveson “is due to publish a report by the end of 2012 in which he will make recommendations on the future regulation of the press and conduct between the press, politicians and police.”

iMediaEthics has written to the Hacked Off Campaign seeking more information and will update with any response.