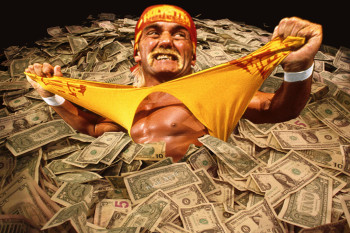 Last week, a Florida jury awarded former wrestler Hulk Hogan $115 million over Gawker’s 2012 publication of an excerpt of a sex tape of him and Heather Cole.

But, this week, the jury added to that, by deciding Hogan should get even more — $25 million in punitive damages.

“We’ve protected a lot of people from going through what I went through,” Hogan said on March 21 of the lawsuit, according to the Associated Press. Hogan tweeted a Photoshopped picture of him after the verdict, the New York Daily News reported.

Thank you God,I am grateful,"I AM THAT I AM". Only love HH pic.twitter.com/Y5R42C4EF7

However, Gawker’s lawyer told the AP: “The amount of that verdict could already be debilitating for Gawker Media.” The total $140 million Gawker is ordered to pay is “more than three times the company’s 2014 revenues,” USA Today reported.

Gawker also is upset that certain information couldn’t be included at trial and Bubba Clem, Hogan’s then-best friend and the ex-husband of Heather Cole, didn’t have to testify.

In a statement sent to iMediaEthics, Gawker’s president and general counsel Heather Dietrick pointed to the previous court rulings that found Gawker’s coverage was newsworthy and said “We expect that to happen again — particularly because the jury was prohibited from knowing about these court rulings in favor of Gawker, prohibited from seeing critical evidence gathered by the FBI and prohibited from hearing from the most important witness, Bubba Clem.”

Dietrick went on to say Gawker is “confident we will win this case” and asked:

Gawker CEO Nick Denton wrote a post on Gawker yesterday about the verdict, calling it “chilling.”

“The enormous size of the verdict is chilling to Gawker Media and other publishers with a tabloid streak, but it is also a flag to higher courts that this case went wildly off the rails,” he wrote. Denton argued further:

“It turns out this case was never about the sex on the tape Gawker received, but about racist language on another, unpublished tape that threatened Hogan’s reputation and career.”