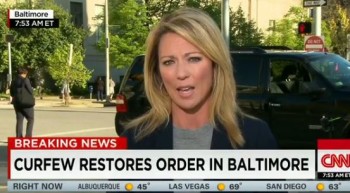 CNN’s Brooke Baldwin apologized today for suggesting U.S. veterans were at fault for the Baltimore riots, saying that when they return “they are ready to do battle.”

While interviewing a congressman, Elijah Cummins, Baldwin said, “I love our nation’s veterans but some of them are coming back from war, they didn’t know their communities and they are ready to do battle.”

Baldwin apologized on Twitter and on air. “I am sorry for what I said earlier about veterans. It was wrong and I apologize to anyone who was hurt by my comments,” Baldwin tweeted.

“I owe you a heartfelt apology,” she added.

To my veteran friends: please tune into #CNN in a few minutes. I wanted to come on tv first thing today. I owe you a heartfelt apology.

I am sorry for what I said earlier about veterans. It was wrong and I apologize to anyone who was hurt by my comments.
— Brooke Baldwin (@BrookeBCNN) April 28, 2015

On air, Baldwin said, “I made a mistake.”

“I was recounting a story, a converation i had had with someone recently about police,” Baldwin said.

“I absolutely misspoke,” she said. “I inartfully chose my words — 100 percent — and I just wish speaking to all of you this morning, I wholeheartedly retract what I said. I’ve thought tremendously about this and to our nations veterans, to you… I have the utmost respect for our men and women in uniform. To all of you i owe you a tremendous apology. I am truly sorry.”

Watch her apology below.