'If It's Not in Print...It's Not Real,' Says Toronto Star Columnist, Contro 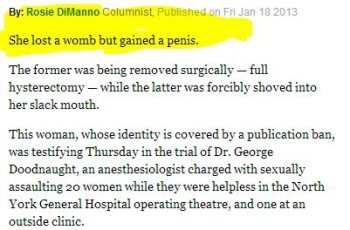 Toronto Star public editor Kathy English responded to crtiicism of Star columnist Rosie DiManno’s controversial opening sentence that a victim “lost a womb but gained a penis” in her report on a sexual assault trial. But, when iMediaEthics asked DiManno for more information about the criticism of her writing, DiManno volleyed back a new excuse for not commenting. She said that because iMediaEthics isn’t “real” as an online-only publication, she wasn’t going to answer our questions. DiManno wrote in response to our inquiry:

For the record, our questions included:

DiManno’s controversial column on the trial of an anesthesiologist and testimony of an unnamed woman’s rape while under anesthesia for a “full hysterectomy,” read in part:

“She lost a womb but gained a penis.

“The former was being removed surgically — full hysterectomy — while the latter was forcibly shoved into her slack mouth.”

According to DiManno’s column the woman’s “identity is covered by a publication ban” and she testified against the doctor.  Reactions to the column’s lede included: MSN’s description that it’s “the most heinous opening to a news story about sexual assault,” Digital Journal calling it “horrifyingly inappropriate,” and Jezebel “pretty revolting.”  But, in response to readers’ criticisms that the column’s lede was “insensitive and demeaning,” English defended DiManno’s “intention” and column in a note she sent to complainants and posted online.

“While I personally concur with those readers critical of this column’s opening sentence, I think DiManno’s writing overall shows sensitivity and empathy for victims of horrific crimes,” English wrote.  According to English, the Star‘s guidelines give more “latitude” to columnists “as long as they fall within the boundaries of good taste,” which she descirbed as a “subjective matter.”

Further, English indicated that because no one “flagged” the opening for review, the column’s lede made it through to publication without being changed.

After receiving DiManno’s response about not commenting to us, we did refer our questions to English, adding a question asking about any standards for the tone of Star reporters’ correspondence with reporters and readers.  English declined to comment or give any more information, writing:

“I have no further comment beyond what the response that has already been published.”