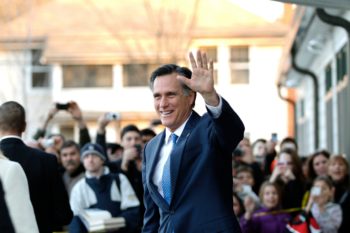 Recently, the ABC News/Washington Post poll reported that Mitt Romney “has emerged from the Republican primary season with the weakest favorability rating on record for a presumptive nominee…trailing a resurgent Barack Obama in personal popularity by 21 percentage points.”

So what? That may be a pseudo-news story, but favorability ratings are hardly the indicators pollsters use to predict elections. After all, the recent vote-preference polls, which ask who voters will support in the election, don’t show anything near a 21-point advantage for Obama, no matter how “unpopular” Romney is according to his “favorability” ratings. Even that same ABC/WP poll finding Romney so unpopular compared with Obama nevertheless showed Obama with only a 7-point lead over Romney in the presidential vote.

Nate Silver addresses this issue, suggesting that ratings early on in the presidential campaign show a weak correlation with electoral success, though ratings closer to the election are more likely to reflect who the winner will be. But he doesn’t address the more central question: Why look at favorability ratings at all? Why not just look at the head-to-head match-ups that pollsters typically measure?

There are many measures that pollsters provide to the public that receive an inordinate amount of news attention, despite their relative uselessness in predicting election outcomes – compared with the more direct vote-choice question. A candidate’s favorability rating is one such measure.