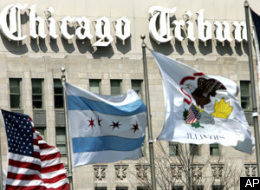 55 Chicago Tribune writers and editors stood up to management when they saw the Tribune marketing dept. entering the sphere of influence and decision making in their newsroom. Their email sent to Editor, Gerould Kern, led to a hasty retreat by Tribune higher-ups.

The Associated Press (AP) reports that 55 writers and editors from the Chicago Tribune sent, what amounts to, a protest letter to their management. (See April 30, 2009, “Chicago Tribune news staff raise concerns about subscribers getting look at news stories”).

It seems that readers were sent a “survey” that provided summaries of forthcoming Tribune articles and asked for feedback. Tribune employees, the ones who presumably wrote and edited these articles, wanted to know, according to AP: “why the newspaper was conducting the surveys and what stories were used. They also wanted to know which readers were surveyed and whether any story had been altered as a result of reader comment.”

AP quotes the email: ” ‘It is a fundamental principle of journalism that we do not give people outside the newspaper the option of deciding whether or not we should publish a story, whether they be advertisers, politicians or just regular readers,’ the e-mail read. ‘Focus grouping as done in the past is one thing. But this appears to break the bond between reporters and editors in a fundamental way.’ ”

It appears from AP’s report that Tribune management has already made a hasty retreat. Gerould Kern, Editor quickly announced the stop of the “brief market research project that tested reader reaction to working story ideas that have not yet been published.” The statement continued : “Premature dissemination of information about stories under development compromises the reporting process,” Kern said. “Our goal is to provide people with news reports that are fair, accurate and complete. Therefore, we publish stories only when they are ready … Research is an important tool in understanding consumer needs. It provides context, and we listen to it carefully. Each day, news decisions are made by journalists.”

That’s all well and good, but didn’t Kerns and top management approve of the survey in the first place? If not, he needs to further explain how the marketing “wolf” ever got into the editorial “hen house” without management’s approval.

AP notes that this “controversy” follows 53 newsroom job cuts from a recent total of 483. AP reports that the Tribune “had previously been forced to seek Chapter 11 protection from creditors.”

Clearly, desperation can mother both inventions and troubling challenges to ethical standards. StinkyJournalism says “kudos” to the 55 Tribune employees who risked their own necks for the greater good of integrity.