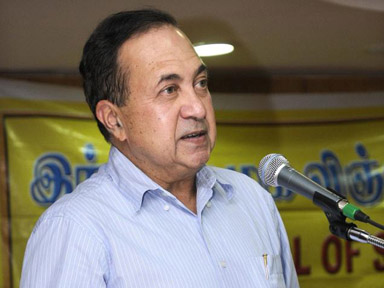 India journalists again criticized the country’s media ethics, The Hindu reported.  Indian media has been embroiled in scandal and criticism the past few months, as leaked tapes implicated top journalists, and other journalists criticized “paid news” and media monopolies.

The most recent batch of criticism came in a three-day annual media seminar called “Whither Media,” which was part of the “Third International Congress on Kerala Studies.”

At the seminar, The Hindu’s editor-in-chief, N. Ram, reportedly “called for ‘bold and radical’ ways” to fix the media’s ethical problems.

Referring to N. Ram, a Special Correspondent for The Hindu wrote: “It should not be a case, as Professor Patnaik had pointed out, of the media seeming to be powerful when covering the financial capital and powerless when speaking for the poor, he said, adding that there was also the need to protect journalists against intimidation by the state.”

Ram further criticized the Press Council of India’s effectiveness and usefulness evidenced by “the manner in which the council was unable to publish its own inquiry report on ‘paid news'” because of “internal divisions.”

(However, as iMediaEthics reported last month, Press Council chairman, G N Ray, commented on paid news at a seminar called “Save ethics, same media,” and reported that “many” of the “big newspaper houses” had printed paid news.  See the report, dated July 30, 2010 here)

Ram also called on the media to evaluate its own ethics standards and to beef up “internet penetration,” according to Yentha.

However, “the media’s primary functions and guiding principles” will not change, Ram reportedly explained.  “Primary among these are the credible information function, the investigative/adversarial function, and the educational function.”

Journalist P Sainath commented during the seminar about the role of journalists as gatekeepers and filters, ExpressBuzz.com reported.  “Media is a business while journalism is a calling,” Sainath is quoted as saying.  “We still have some space which is shrinking. First of all, we need to make a choice whether to be journalists or to be stenographers.”

The November publication of leaked tapes linking journalists with lobbyist Niira Radia has led to much media criticism and has even been called “India’s own WikiLeaks.”

“It is too premature now,” Ray is quoted as saying.  “Whole facts haven’t come out.

Let all the facts emerge and the Supreme court come to a conclusion and then institutions like PCI take action.”

See iMediaEthics reports on what has been called Radiagate here and here.