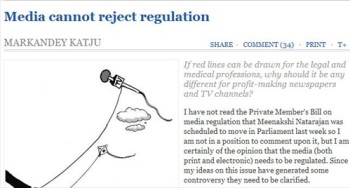 (Credit: Indian Press Council Chairman Markandey Katju addressed media regulation and ethics in a May 2 editorial for the Hindu. (Credit: The Hindu, screenshot)

India’s Press Council chairman Markandey Katju called for a better regulation system for the country’s media in an editorial in The Hindu.  Katju wrote that his “ideas on this issue have generated some controversy” so he wrote the editorial to explain that:

“I want regulation of the media, not control. The difference between the two is that in control there is no freedom, in regulation there is freedom but subject to reasonable restrictions in the public interest.”

Katju noted that the media must be regulated to ensure media freedom because freedom of the media is tied to the public interest and because media companies are concerned with “making profits.”

Further, he questioned how other professions like lawyers, doctors and accountants have regulatory bodies with powers to revoke licenses but the press doesn’t really have an enforcing regulatory body.  Concerning India’s News Broadcasters Association and the Indian Broadcast Editors’ Association, Katju wrote:  “how many licences of TV channels have you suspended or cancelled till now?”  He also called for the NBA and BEA to publicize their work “to ensure transparency and accountability.”

In his editorial, Katju suggested that broadcast media be included under the press council’s jurisdiction and a re-naming of the council to “the Media Council.”

First Post pointed to The Hoot’s February report on the “News Broadcasters Association’s role as a self regulatory body.”Indian media watchdog site The Hoot identified the NBA as a four year old “voluntary self-regulatory industry body.”  According to The Hoot’s report the NBA doesn’t really address many complaints against broadcasters.  The Hoot wrote:

“The way much of the media has been behaving is often irresponsible, reckless and callous,” Katju wrote.

We wrote last November when Katju said the media is on a “very poor intellectual level” and identified what he found to be “three major defects in the Indian media” including too much reporting on entertainment, partisan media and superstitious media.  Katju’s comments were criticized by the Indian Newspaper Society, the Broadcast Editors’ Association and the International Federation of Journalists for being negative toward journalists.