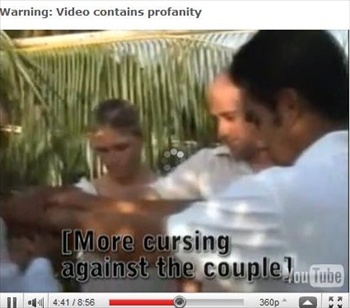 Minivan News' publication of a video of locals at a Maldivian resort mocking tourists in a wedding vow renewal ceremony (see screenshot above) led to criticism from the Maldives National Journalists Association. (Credit: Minivan News, YouTube)

The president of the Maldives National Journalists Association (MNJA) criticized Minivan News, an English-language Maldives news website, for its reporting on a Maldivian resort wedding video which mocked tourists.

Here’s the backstory: Minivan News’ Oct. 26 story reported that a tourist couple were mocked in their wedding vow renewal ceremony at the Vilu Reef Beach and Spa Resort.  The taunts were spoken in Dhivehi the official language of the Maldives.

According to Minivan News, some of the comments made in the local language during the ceremony were:

The couple reportedly didn’t know they were being mocked, but the video was posted on YouTube Oct. 24. Minivan reported Vilu Reef Manager Mohamed Rasheed said “that the staff member who uploaded the video did it as ‘a joke’, without ‘realising the seriousness of the potential consequences.’ ”

Since the story’s publication, the president of the Maldives has apologized to the couple and called on the media to respect their privacy, Minivan News reported.

Minivan News questioned why the MNJA president complained about their report on behalf of the journalists association, instead of the Maldives Association of Tourism Industries (MATI), for which he is also head.

The Oct. 28 announcement condemned Minivan News for “the verbatim translation of the filthy language used by a ‘celebrant’ in a symbolic wedding ceremony.” Minivan News translated and posted the press release criticism.

The press release was signed by SIM Ibrahim Muhamed, the MNJA’s president.

The MNJA stated that it’s a violation of journalism ethics to publish “filthy language” and that no “responsible newspaper” should publish it.  Further, the MNJA wrote that language published by news organizations should be acceptable for children and families, and that Minivan News’ publishing the “filthy language” “will damage Maldivian tourism and business.”

In response, Minivan News explained that it “heartily agrees” with the concern over “filthy language,” but that the MNJA shouldn’t be complaining. Instead, the Maldives Association of Tourism Industry, which is headed by the same person as the journalists association, should be complaining, Minivan News wrote.

“Furthermore, Minivan News believes that the duty of a ‘responsible’ news publication is to bring such sensitive issues to light, without fear or prejudice, holding big business to account when its behavior damages the Maldives’ cherished reputation for tourism excellence,” the independent news outlet explained.

The news website’s editor, JJ Robinson, clarified that the complaint came from MNJA Sim Ibrahim Muhammed, “an esteemed elder statesman of the tourism industry, and far better known as the chairman of MATI” (Maldives Association of Tourism Industries).

The Maldives Journalist Association’s Ahmed Zahir confirmed for StinkyJournalism that his organization has no complaint or affiliation with the MNJA’s complaint about the video.

Robinson added that Minivan News hasn’t had any comment from the tourism organization since its response.

iMediaEthics asked if Minivan found complaints about the language in the video to be justified given that the video was flagged “Warning: Video contains profanity.”   In response, Robinson wrote:

“It looked like a fairly half-hearted attempt by an industry body to deflect blame for the Vilu Reef incident onto Minivan News, and escape any responsibility for the problem – the same attitude that seems to have led to the Vilu incident in the first place. It’s not like we force-fed filth to our readers, or have a monopoly on its supply.”

Further, the video has led the tourism industry to “look in the mirror,” Robinson wrote.

After speaking with resort managers, Robinson noted that they “believe that once it dies down, it will both motivate presently lacklustre managements to take more responsibility for the treatment of guests, as well as prompt some soul searching of certain darker elements of the national character. By all accounts this was not an isolated incident, and both these managers pointed out that all local politics aside, the industry is in this together.”

Robinson continued: “MATI is a respected industry body and its members know the resort industry perhaps better than anyone else in the country – it’s an odd line to take when it’s perfectly placed to take command of solving the issue and collect all the credit for doing so. It sounded like a decision made by committee.”

Robinson recently wrote a paper about the “top five challenges facing reporting in the Maldives.”  He featured the following issues:

iMediaEthics has emailed the Maldives Association of Tourism Industry asking if it has comment about this story, and also asking Muhamed why he complained about the Minivan report via the MNJA not the MATI.  We will update with any response.

UPDATE: 10/31/2010 10:30 AM EST:  Mohamed of the journalists association and tourism industry responded to iMediaEthics’ e-mail.    He responded that “MATI and MNJA have nothing to do with one another” –an untrue claim on its face in that both organizations share the same man as its respective leaders (Mohamed is the secretary general of the MATI and president of the MNJA). He attached two Oct 29 press releases–from MATI– in his email to us. To summarize them:

We have written back Muhamed to repeat our question about why he complained about the video via the MNJA instead of the MATI, and will update with any response.

UPDATE: 11/1/2010 6:50 PM EST:   Muhamed wrote in response to our question about complaining via the MNJA, not the MATI: “It was put forward by me in the capacity of the President of MNJA.  I don’t believe MATI is interested in journalism ethics and standards in the country.  If this is of any interest to you, I am also President of the Maldives Tourism Workers Union, and the Employees Federation of Maldives.”