Irish Independent Retracts, Donates $ after Column Critical of its own Columnist - iMediaEthics

Irish Independent Retracts, Donates $ after Column Critical of its own Columnist 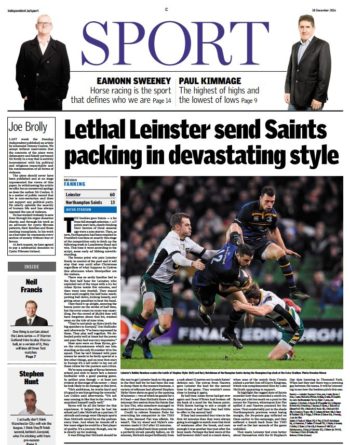 The Irish Independent published a lengthy retraction for a defamatory article about Joe Brolly, a former soccer player and current Irish soccer analyst and lawyer. The Independent‘s Tommy Conlon criticized Brolly, who also writes for the Independent, heavily in the article, headlined, “Joe Abu Hamza al-Brolly clings to vicious past as world tries to move on.” The newspaper said it was donating a “substantial” amount to Cystic Fibrosis Ireland.

The original article appears to have been unpublished, but a picture of the print edition is posted on Twitter. iMediaEthics has contacted the Independent for more information.

Powerful stuff. Joe Brolly gets a right shellacking from his Sindo near neighbour Tommy Conlon, aka @TConlonthecouch pic.twitter.com/2v4ZEiw1qY

The Dec. 18 retraction reads in full:

“Last week the Sunday Independent published an article by columnist Tommy Conlon. We accept without reservation that the contents of the piece were defamatory and falsely portrayed Mr Brolly in a way that is entirely inconsistent with his political and religious impartiality and his condemnation of all forms of violence.

“The piece should never have been published and at no stage represented the views of this paper. In withdrawing the article we offer Joe an unreserved apology as does the author Mr Conlon. It is a matter of public record that Joe is non-sectarian and does not support any political party. He utterly upholds the sanctity of human life and has always opposed the use of violence.

“He has worked tirelessly to save lives through his organ donation charity, and through his work as an advocate for cystic fibrosis patients, their families and those needing transplants. In his work as a barrister he represents every section of society without fear or favour.

“At Joe’s request, we have agreed to pay a substantial donation to Cystic Fibrosis Ireland.”

Irish Independent Retracts, Donates $ after Column Critical of its own Columnist