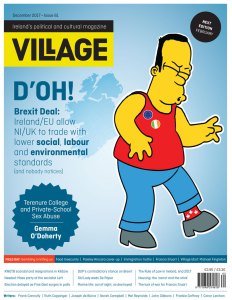 Village, an Irish political and cultural magazine, published an editorial about the “peaceful revolution” against sexual harassment leading to the outing of harassers like Harvey Weinstein. In its commentary, the magazine addressed former Gate Theatre director Michael Colgan, who the Irish Times reported in November was accused of sexual harassment by several women.

Village’s Nov. 10 editorial, “Hypocrisy on harassment,” argued, “Administrators, actors, and particularly the media, are not taking their share of responsibility for the indulgence of predatory sexual monsters and bullies of all sorts.”

“Harvey Weinstein, ogre, has spawned the sort of peaceful revolution that only the age of social media can comprehend,” the unsigned editorial reads. “He has, by his fall, led to the outing of a number of other ogres. We document two of them in the current edition of Village: Kevin Spacey and Michael Colgan.”

The editorial upset Colgan, whose lawyer Paul Tweed called for a retraction and apology shortly after publication, according to the Irish Times. “Your outrageous article seeks to associate our client with and make him the subject of the serious criminal allegations that have been published in the media regarding Harvey Weinstein, Kevin Spacey and others with the clear defamatory inference that our client has been guilty of serious sexual crimes, including rape,” Tweed wrote in the letter.

Because Colgan didn’t get that retraction and apology, he is now suing for defamation. Tweed told iMediaEthics by e-mail, “I would confirm that defamation proceedings have been issued against the editor and publisher of the Village magazine.”

Michael Smith, the editor of Village, told iMediaEthics by e-mail, “The editorial, as anyone can read, was about harassment and abuse of power – and how they, in general, reflect inequality; not about rape or serious criminality.”

iMediaEthics saw a copy of the claim, which calls for damages and an order to keep Village from “publishing or causing to be published the said or any similar words defamatory of the Plaintiff.”