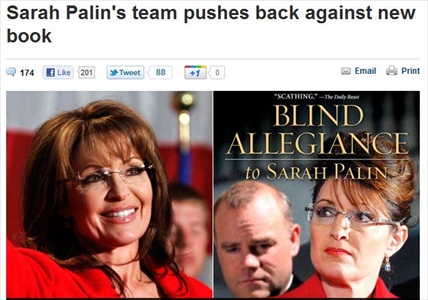 The cover of a new “tell-all” book about Sarah Palin seems to be a Photoshopped image.  The cover image shows the author, former Palin aide Frank Bailey, standing behind Palin, suggesting that Bailey was photographed in that proximity to Palin.

But, according to Palin’s representatives, the cover image is “modified” because the image of Palin came from a photo of her standing with governors.  iMediaEthics wonders if the photo was altered to make Bailey seem “closer” in relation to his book subject, therefore making him more of an authority on the former governor.

POLITICO reported: “SarahPAC spokesman Tim Crawford highlighted Bailey’s book cover, which is a modified image. The original photo was of Palin standing next to other governors at an RGA event, not next to Bailey.”

The book is titled Blind Allegiance to Sarah Palin.