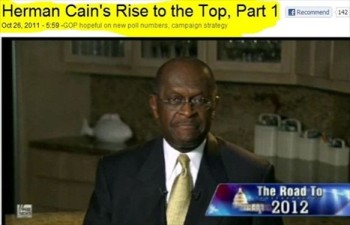 About two weeks ago, I warned readers on this website not to be fooled into thinking that Herman Cain was a GOP frontrunner.

Since then, several national polls of Republican voters have shown Cain leading all the other candidates, with an average advantage of 6.5 percentage points. Surely, now I should admit that Cain is a frontrunner, if not the frontrunner?

All of these figures are based on national polls of Republicans. The vast majority of these “likely primary voters” haven’t even begun to consider who the candidates are, and their so-called vote preferences reflect only the latest surge of positive news. The truth is, as Allison Kopicki ofthe New York Times writes, “Most Republican Primary Voters Remain Uncommitted.”

Yes, that’s right! When given the option to tell the whole truth, eight out of 10 voters – who initially named a candidate when asked the forced-choice voting question – then admitted “it’s too early to say for sure” who they’ll support.

The fact is – based on national polls – the race is wide open. How can anyone be a frontrunner when the vast majority of voters haven’t committed to a favorite?

But more important, as I pointed out in my previous column, the national polls of voters are asking the wrong people. Republicans all across the country simply don’t vote at the same time.  The nomination contest is a series of state contests, starting with Iowa, New Hampshire, South Carolina and Florida (Nevada was bullied by New Hampshire into moving its Caucuses into February, so it will be the fifth state contest instead of the third).

This process means that the first state contests have a great deal of influence on the voters in subsequent contests. We need to examine how the candidates are doing in these early states to get an idea of who might be a frontrunner.

So, how are the candidates doing in the early states?

The most recent polling in those four early states was conducted by CNN, which shows the following: If we believe the state polls, it sure looks like Cain is a frontrunner, even if not the leader! He is second in all four states, and essentially tied with Romney in both Iowa and South Carolina.

Voter indecision at this point could favor any of the candidates, so in large part their success depends on how well they can get their messages to the voters.

So, why do I continue to resist saying Cain is a frontrunner at this time (besides the obvious fact that so few voters have made up their minds)?

Two reasons: 1) He refuses to campaign in Iowa and New Hampshire, at least to the extent the voters there have typically demanded (so his poll numbers could drop precipitously as the election nears); and 2) he has raised only a small amount of money compared with Romney, Rick Perry, Ron Paul, and even Michele Bachmann.

Even should Cain pull out a victory in Iowa, as Mike Huckabee did four years ago (and Huckabee campaigned extensively in that state), it’s unlikely Cain will have the money to continue a vigorous campaign in subsequent states.

Things could change, of course. Cain could decide to actively campaign in the early states, instead of continuing on his book tour. And he could possibly raise more money than he has.

In the meantime, I still say – don’t trust those polls showing Cain as a frontrunner, much less the leader of the GOP pack. Remember Rudy Giuliani, the 2008 GOP frontrunner until the voting began. Cain could be following in those footsteps.