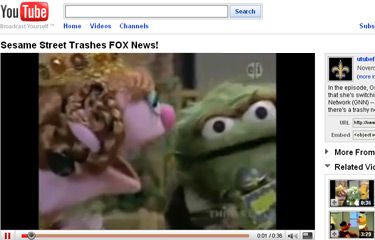 Two years after an episode of Sesame Street first aired, the dregs of controversy are being stirred. And while it would be fair to criticize politicized content in a publicly-funded children’s program, some argue that the offending clip is a playful parody that has been mis-interpreted.

In a segment from a 2007 episode — which also aired a few times in 2008 and, most recently, on October 29, 2009 — Oscar the Grouch plays a news host on the Grouchy News Network, or GNN, a network committed to “all grouchy, all disgustin’, all yucky” news. After Oscar is smooched by a couple of interviewees, he receives a phone call from a viewer unhappy that GNN isn’t upholding its stated “grouchy” mission. “I am changing the channel,” the grouchy viewer says. “From now on I am watching ‘Pox’ News. Now there is a trashy news show.”

It was this statement that triggered reactions. A conservative blogger at Andrew Breitbart’s Big Hollywood writing under the pseudonym “Stage Right” (via John Nolte at Big Hollywood) interpreted the Sesame Street sketch as an attempt by the radical left to “turn our kids against us.” Stage Right argued that, “If Mom and Dad watch cable news, it’s better than 50/50 they watch ‘POX News.’  So what gives? PBS — a network partially funded with my tax dollars — has the right to tell my kids that their parents watch “trashy” news?  The message is clear, I can’t even sit my kids in front of ‘Sesame Street’ without having to worry about the Left attempting to undermine my authority.”

Stage Right’s outrage was picked up by the New York Times Arts Beat blog, the Huffington Post, Mediaite and Time magazine’s Tuned In blog, where writer James Poniewozik found Stage Right’s argument lacking. “…there may even be a convincing argument to be made, from a close reading, that Sesame Street includes casual liberal assumptions in its writing…But it would take a deeper analysis than, ‘The puppet called me a name!'”

Doug Gibson blogging at the Standard-Examiner also thought Stage Right’s criticism was overblown. In a comment on his own post Gibson wrote, “I thought the whole trifling matter to be ridiculous.”

But a handful of letters from parents and grandparents, one decrying the segment as “political brainwashing,” indicated that some viewers understood the clip in the same light as Stage Right.

In his November 4, 2009 column, PBS ombudsman Michael Gelter reproduced the letters he received concerning the segment. A few seem to have mis-heard the line about “Pox” as “Fox”; another misunderstood the bit altogether believing that Oscar was playing a Fox reporter. But it’s fair to assume that even if they had correctly heard the segment, they would have been upset by the implication that “Pox” is “trashy.”

One viewer calls the segment “ridiculous behavior” and states that she will no longer support the station.  Another writes,”I will never watch Sesame Street again and find it pathetic that you would use it as a platform for pushing the White House message and apparent conflict with Fox. I am a Fox News watcher and PBS children’s show watcher. Some things should not mix. I refuse to let children’s programming brainwash my child into certain political views. It is not right and should be addressed. Having conservative views is not a bad thing and I plan to raise my children to think for themselves and not listen to radical liberal thought.” A more diplomatic letter-writer said, “The show is for teaching children their letters and numbers, not the producers’ political view and biases.”

Gelter sides with the disgruntled viewers — but not before noting that this is the first airing that has prompted response from viewers, later suggesting that the segment might resonate more now because of the current tension between Fox News and the White House.

Gelter also quietly quells accusations that this was intentional editorializing, writing “…Pox News as an alternative and competitor to the Grouch News Network would seem to be a clever and appropriate title.”  But then he admits that “…you would have to be anesthetized as a producer not to assume that many parents will hear this, or assume this, to be a clever shot at Fox News.”

In the end, Gelter comes down against the Pox bit. “I don’t know what was in the head of the producers, but my guess is that this was one of those parodies that was too good to resist. But it should have been resisted. Broadcasters can tell parents whatever they think of Fox or any other network, but you shouldn’t do it through the kids.”

But the ombudsman’s column didn’t include comments from anyone at Sesame Street. In a second post, Gelter explains that he contacted program officials for a statement, but didn’t hear back from them before he published his response. Thus, we get another perspective.

Miranda Barry, executive vice president of content at Sesame Street, defends the segment by first noting that it was written in 2006 and first appeared in 2007, long before Obama took office and certainly before anyone could have foreseen the recent attempts by the White House to delegitimize Fox News.

But that doesn’t necessarily preclude the segment from political bias. Barry continues, “The whole segment was a parody of CNN (called GNN) or the ‘Grouch News Network.’ Children who watch Sesame Street (and adults who remember what it felt like to be a kid watching Sesame Street) know that Oscar the Grouch is a contrarian. He lives in a trash can and loves everything ‘yucky,’ and ‘disgustin.’ For a Grouch, ‘Trashy’ is high praise! Not only would child-viewers be unlikely to connect ‘Pox News’ to Fox News, in the context of this scene, they would understand the characters to be saying that ‘Pox News’ is better than ‘GNN.'”

Responding directly to Gelter’s comment that a producer would have to be “anesthetized” not to see that parents would interpret Pox as a slam on Fox, Barry writes “The writers expected that adult viewers would make the connection to Fox News as well as the connection to CNN. This was equal-opportunity parody — Oscar always tries to offend everybody!”

Obviously, Sesame Street writers found fodder in real cable news titles — it’s no stretch to see that “GNN” is inspired by CNN and in that Pox was a play on Fox News. And if this parody did in fact contain political content, it wouldn’t belong on a publicly-funded children’s program.

But as Barry points out, the news-parody was simply a framework used as a vehicle for a different, and certainly not poltical, lesson. “In the full story, Oscar keeps trying to find angry, frustrated and grimy stories, but each time he finds someone feeling bad, they soon look on the bright side and cheer up. The curriculum for that episode was recognizing emotions.

“Writing on two levels, addressing young children with age-appropriate curriculum and adults with humor, is a trademark of Sesame Street that has kept the show popular for 40 years. Jim Henson, Jon Stone, Frank Oz and others set a witty and silly tone for Sesame Street that our current writers work to maintain despite the demands of political correctness. Your readers might also be interested in why we have that grumpy, grouchy, contrarian Oscar on the show. His curriculum purpose is to teach differing perspectives — an important life skill where children learn that it takes all kinds of people to make a world. Watching Oscar shows kids that you can listen to someone with a very different world view, and even be friends with them, without losing your own perspective.”

Comments on the New York Times Arts Beat blog support Barry’s perspective, including one from someone who once worked with Jim Henson. “Kindness and open-heartedness dispensed with humor. That is Sesame Street,” the commenter writes. “The insights I gained into what defined the creative and content decisions for the program were at once simple and profound. The main questions were: was the material funny, and was it hurtful to anyone? There was a generosity of spirit that pervaded every decision. There was nothing political about any of it.”

To see where you fall on this controversy, perhaps it would be best to follow Barry’s final suggestion: that we all take another look at the clip. For additional context, here’s another section from the longer GNN bit.