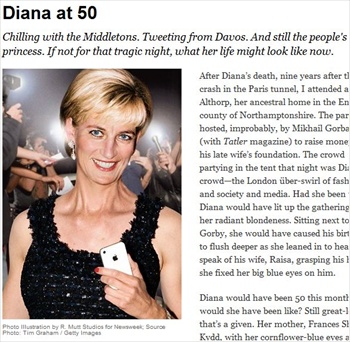 "WHAT IF" REPORTING AT NEWSWEEK?...Newsweek Photoshopped a picture of Princess Diana and speculated what her life would be like had she not died. (Credit: Newsweek, screenshot)

Newsweek Photoshopped a picture of the late Princess Diana into a photo of Kate Middleton and featured a cover story on what “if she were here now.”  Diana would turn 50 years old this week, if she were alive.

While some bloggers and journalists have questioned if the feature is “cool or creepy,” there’s really no kind way to put this.  Newsweek’s fake photo cover and gossipy speculative story by editor Tina Brown is insensitive and distasteful. It’s the sort of thing that in the past only grocery store tabloids would publish, usually accompanying stories purporting that Elvis or JFK were still alive.

Others haven’t questioned the appropriateness of the feature, with MediaBistro’s Fishbowl LA  labeling it “explotiative,”  and E! Online calling it “freaky fan fiction.”  BlogCritics called it disrespectful, “disgusting, unacceptable, and downright rude.”

Brown’s article debated how Diana would dress if she were alive today and suggested she would use Botox.  Brown speculated that Diana would be remarried at least twice, at least once for money and power, and guessed at whom Diana may gossip about and with whom she would compete.  Photoshopped images of Diana holding an iPhone and fake tweets accompanied the article.

For an upcoming report in iMediaEthics’ series of Books, Authors, and Media Organizations on Media Ethics, I’ve been reading the Canadian journalism ethics textbook Morals and the Media.

One bit of advice from that book that should have been applied in the case of Newsweek’s report is the “reversibility rule:” How would you feel if this type of speculative, gossipy, Photoshopped report were published in what purports to be a news outlet about one of your relatives or someone you knew?

Is this cover story indicating that Newsweek has decided to be considered tabloid, and not news?  As the UK Telegraph, which called the feature “ghoulish,” explained, “This kind of stunt is more suited to a junk-filled tabloid than a serious political magazine, as Newsweek claims to be.”

Newsweek could have honored Princess Diana and her memory by simply writing an article that recollected her life.  One reader, Walter Whitman, suggested: “Why not do a tribute to her and retrospective of her life? Why not highlight the charities she worked for and raise awareness of the issues she was passionate about? This is offensive to the public, to her family, and to journalism.”

Most of the 53 comments on the article yesterday evening were critical, calling the article “wrong,” “tacky,” “shoddy,” “awful,” “offensive,” “pathetic,” “a new media low,” and “crass,” among other criticisms. Some readers, like Joe Bua, wrote in that they are canceling their subscriptions,

Another commenter, Harry McKinley, wrote in to remind that

“Diana isn’t simply a media caricature but an actual woman and mother who died under tragic circumstances. I’m not sure mocked-up photos of her holding an iPhone or making insipid tweets constitute journalism but are, I feel, perhaps more about attracting readers and unfortunately at the expense of credibility.”

The Society of Professional Journalists’ ethics code contains a few tenets that perhaps Newsweek should also have considered before running this mockery of news.

“Well, it went absolutely viral actually in the last two days because the cover has created a huge amount of debate. Some people think it’s kind of spooky and ‘Should we have done it?’ and others think it’s very effective. I think it’s a very intriguing package to show what she’d be like today. You know we aged her just slightly… to me it’s just sad, a saddening thing.”

Fishbowl NY criticized Brown’s comments, asking how critics of the Newsweek  feature will “feel when the editor of the story takes the ‘even bad publicity sells magazines’ tack.”