Is the Newseum Guidebook cover advertising or faked news image? 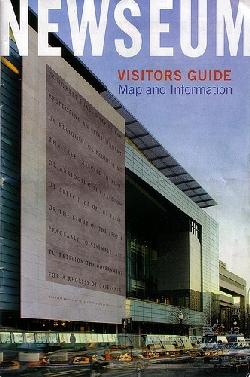 Chris Dunn, in her blog, Words and Light: An exploration of (photo) journalism, first refers to the Newseum Guidebook cover (emphasis original) in a post titled “Newseum: Fail”, “Unfortunately, the cover is a gross misrepresentation of how the Newseum actually appears. I’ve got proof. ”

Dunn goes on to note that a prominent street lamp seems to have been removed from the cover shot–eg photoshopped out– without disclosure. She writes: “Therefore, I conclude that the front cover of the visitors guide to a first-class journalism museum has been photoshopped to remove a streetlight that in reality stands in front of the First Amendment. If that’s not a glowing demonstration of photo editing ethics on a journalism museum publication, I don’t know what is. What a shame.”

I added a comment that was not approved for posting : “Hi from imediaethics.org, that shares your concerns that news photos should be unaltered representations of reality –not staged or photoshopped. Look again at the ‘photo’ you questioned. It looks to me that the cover is a architectural rendering of a future building and not a photo at all–you know, the drawings that architect’s do for clients. Case in point look at the ‘traffic blur’ and other ‘details’  on the street. Looks like art and not a [journalism] photo to me…I think the museum should label the image as a drawing [art] instead of a photo–if that is the fact. (Did you look at the photo credit, call the museum or photographer before calling them ‘failures’? All important to do, you know, before publishing this post).” imediaethics  also asked Dunn for comment.

Dunn did not call or write the photographer but looked him up on the web.  In our view, unless she talked to the man or the Newseum, it was unfair to go so far as she did in her post (to state the Guidebook “fail [ed] “) The Society of Professional Journalists ethics code states that journalists should give people an opportunity to respond before alleging “wrongdoing.” Architect “drawings” nowadays are often digital rendering in the hinterland of appearance between photos and artworks. Finding out when the photo (or drawing) was made answers the question about the street lamp removal in addition to just plain asking.

So I call and spoke to the woman in charge of publications at the Newseum to find out more. She confirmed that the photographer, Sam Kittner, added “special effects” and gave me his contact information when I asked for more details. My email to Kittner included  links to the blogger’s (and tweeters) posts. I asked him to tell me more about what he did to the image and mentioned the question bloggers had about the street light removal. This post will be updated when and if I hear more… meanwhile I will give Dunn the last word until then.

Dunn mentions there was a discussion on Twitter about her claim. She writes: “In a related note, a Twitter debate ensued my blog post, and several other MU journalism students (@mcavanah86, @jmsummers and @pfal) argue that the visitors guide is essentially advertising and that using photoshopped images is permissible for advertising.  I don’t disagree with that. But if Kittner’s photo were edited, I don’t think a journalism museum should have used it. Commercial purposes or not, a journalism museum should uphold the principles on which the journalism profession is based — and that includes not using photos with objects edited out of them.” For imediaethics.org, with the information we have so far, this is an issue of proper labeling and disclosure that the photo is an illustration.

UPDATE 05/26/09: Dunn made an update and approved my comment. She responded in her blog comments: “I jumped the gun in posting this, which I shouldn’t have done, but I did have the integrity and transparency to post a correction rather than deleting the post and my mistake altogether.”

I replied (also in her blog comments): “I really think this is an issue of advertising illustration vs. news photo and I think your point is well taken that in light that this is a news/journalism organization and given the sensitivities about the use of photoshop, it would have been a good idea to put a disclosure in the photo credit. However, I also agree that you jumped the gun by saying the Guidebook fails. It is what I tell imediaethics.org interns all the time–pick up the phone and call people to ask questions before publication. Indeed, you did ‘have the integrity and transparency to post a correction rather than deleting the post and my mistake altogether.’ MsM are you listening?”

Is the Newseum Guidebook cover advertising or faked news image?