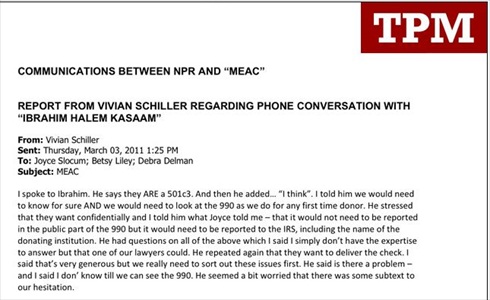 After the firing of Ron Schiller and the resignation of Vivian Schiller, NPR has reiterated that it never accepted the $5 million it was reportedly offered by Project Veritas, the group run by James O’Keefe.  Vivian Schiller resigned March 9 from her position as NPR CEO after an undercover video was published of Ron Schiller, NPR head of fundraising at the time, making controversial comments about Tea Party supporters and NPR’s reliance on federal funding.

Talking Points Memo published the e-mails between NPR and the “Muslim Education Action Center.” The e-mails are published here. In them, Vivian Schiller wrote to NPR’s Joyce Slocum, Betsy Liley and Debra Delman that NPR needed to verify that MEAC is a 501c3. In another e-mail, Joyce Slocum wrote to MEAC asking for proof that it is a 501c3.

An e-mail from MEAC’s “Omar Kasaam” asked for confidentiality about MEAC’s tax status and stated that it can’t provide contributor information.  “Information such as a list of our contributors is not possible I’m afraid — much the way NPR does not disclose its donors.”

The Blaze’s Scott Baker analyzed the full two-hour secretly taped lunch meeting compared with the edited version that was much circulated.

“Clearly the NPR executives, particularly Ron Schiller, show poor and, at times, despicable judgment,” Baker wrote.  But, Baker found several incidents in which the editing was misleading.  For example, in the edited video, viewers hear that MEAC is “a Muslim Brotherhood front group,” but the full video “does not explain how the NPR executives would have a basis to believe they were meeting with a Muslim Brotherhood front group.”

Baker also highlighted an area of the edited video which suggests Schiller “is aware and perhaps amused or approving of the MEAC mission statement” in favor of “the acceptance of Sharia.” But, Baker notes: “when you look at the raw video you realize he was actually recounting an unrelated and innocuous issue about confusion over names in the restaurant reservation.”

Schiller’s comments about Tea Party supporters were heavily reported, but Baker notes that Schiller doesn’t just bash conservatives in the video. He also “speaks positively about the GOP. He expresses pride in his own Republican heritage and his belief in fiscal conservatism.”

And according to NPR, “in the longer tape, it’s evident Schiller is not giving his own views but instead quoting two influential Republicans — one an ambassador, another a senior Republican donor. Schiller notably does not take issue with their conclusions — but they are not his own.”  NPR found that “elements” of the video were “taken out of context.”

NPR also cited the opinion of Poynter’s Al Tompkins, who described his initial response to the edited video was “What I saw was an executive at NPR expressing overtly political opinions that I was really uncomfortable with,” Tompkins said. “Particularly the way the video was edited, it just seemed he was spouting off about practically everything.”  However, Tompkins reportedly “said his mind was changed by watching that two-hour version.”

Tompkins noted that Schiller said “six times” that “you cannot buy coverage.”  For example, right after the person pretending to be Ibrahim Kassam called NPR National Palestinian Radio,” Schiller said “There is such a big firewall between funding and reporting. Reporters will not be swayed in any way, shape or form.”