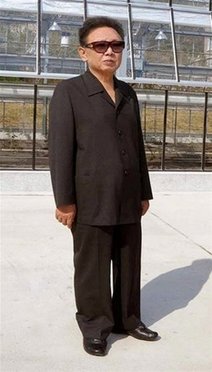 AFP reports that in June, TV Asahi Japan broadcast  “an exclusive image” of Kim Jong-Un from a “reliable person in South Korea.” The image turned out to be a fake. Instead of a photo of Kim Jong Il’s third son–who people speculate may be the next North Korean leader–TV Asahi had to retract the snapshot scoop they published as the image was of  “a South Korean construction worker.”

Any image of Jong-Un would have great value, AFP explains, as the “International media know little about Jong-Un, Kim’s youngest son — who was reportedly schooled in Switzerland — and have only shown his childhood photograph.”

Bottom line? TV Asahi was duped and unknowingly identified the construction worker in the image as Kim Jong-Un while airing the photo June 10.

An unnamed South Korean army official was quoted by Yonhap: “We believe he befriended some Japanese journalists while staying in Japan for study a few years ago.” The official added that the soldier “knew it was a fake photo before delivering it.”

Even though the Japanese TV network denies buying the photo for two million won (1,600 dollars), news reports state that the soldier behind the scam was “punished” for selling the fake image to TV Asahi.

The South Korean construction worker who was falsely identified in the caption as the Korean heir apparent, was in fact, a 40- year-old man, “Bae Seok Bum.”

The hoaxer apparently found the image from the construction worker’s web site. AFP writes that Bum “was reportedly speechless at the attention his photo received. He said he posted it on a website merely to show others how closely he resembled the elder Kim.”

It is notable that instead of putting TV Asahi in the critical cross-hairs for having published a fake image, AP and AFP, featured the soldier’s punishment in their headlines.