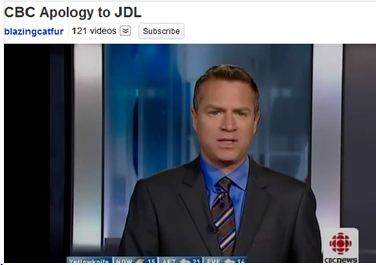 CBC apologized to the Jewish Defence League of Canada for inaccurately calling it a terrorist organization. (Credit: YouTube, "blazingcatfur," screenshot)

The Jewish Defence League of Canada’s Meir Weinstein announced the group intends to file a defamation lawsuit against Canada’s CBC and possibly its reporter, Bill Gillespie, the Jewish Tribune reported.

The suit comes after the network labeled the JDL “a terrorist group,” according to weekly Jewish newspaper.  The JDL’s website states that its purposes include “the restoration of pride and integrity to the Jewish People, the return of Jewish values, the reclamation of the Jewish sense of Justice and the abolition of hatred and bigotry.”

CBC’s Gillespie, in a report about the July 2011 Norway attacks, called the group a “banned terrorist organization in Canada” on air July 31 and apologized Aug 5 on-air.

The Jewish Tribune reported that CBC executive editor Esther Enkin stated in an e-mail response to a complaint by “JDL supporters” that Gillespie “intended to refer to Kahane Chai (or Kach), which is on the Canadian government list of terrorist organizations, and not the JDL.”

The JDL’s Weinstein criticized that apology for its timing on a Friday “before the long weekend when viewership dips,” according to the Jewish Tribune.

We wrote to CBC asking for comment. Jeff Keay from CBC’s media relations department wrote that there isn’t “much to add” and that “Like any reputable news organization, we followed up our error with a correction, as per our normal procedure.”

iMediaEthics has written to the Jewish Defence League and will update with any response.