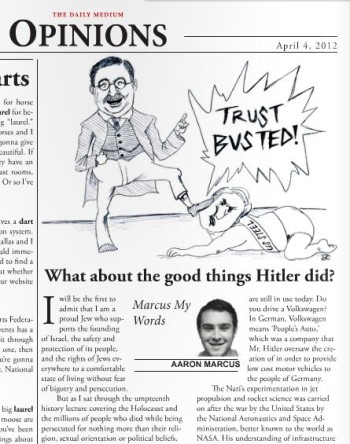 Rutgers University student satire newspaper The Medium published an April 4 column “What about the good things Hitler did?” under the name of a Jewish student who didn’t write the column, the Associated Press reported.

The student in question, Aaron Marcus, writes for “independent Rutgers newspaper, the Daily Targum” and called his being mis-identified as the author “was hurtful.”

The Daily Targum reported that Marcus has “filed a bias complaint against The Medium” over the article.  See the article here.

According to the Daily Targum, the article also carried Marcus’ “photo, name and column title, “Marcus My Words.”  The Medium’s edition was a “special April Fool’s issue,” the Daily Targum added.

Further, the Daily Targum noted that Marcus reports “pro-Israel messages” and Marcus called the article “so horrific.”  Marcus also distinguished between satire — “something funny” — and bias.

Likewise, Rutgers University President Richard L. McCormick weighed in on the column which he called “particularly despicable in light of Mr. Marcus’ Jewish faith.”  McCormick added, according to the Daily Targum: “No individual student should be subject to such a vicious, provocative and hurtful piece, regardless of whether First Amendment protections apply to such expression.”

According to the Daily Targum, The Medium‘s editor-in-chief Amy DiMaria defended the column as satire and noted that its spoof edition is an annual feature.  She is quoted as saying:

“We do it every year, impersonate a Targum columnist as part of ‘The Daily Medium.”

Further, DiMaria added that Everyone knows who we are, and we print everything as satire. We’re not out to get anyone or be malicious.”

According to the newspaper’s website, “during the 1980s, The Medium stopped printing real news” and “began printing satirical fake news stories.”  Further, the newspaper’s website identifies itself as “sometimes preferring to be a test of the First Amendment, and other times preferring to mimic other satire publications such as the Onion. Its current form is a synthesis of these two styles.”

We wrote to the Medium’s editor-in-chief Amy DiMaria, who told us she is “restricting my comments to media associated with Rutgers University.”

We wrote to Student Press Law Center to ask what it thinks of this case.  Executive director Frank LoMonte told us that SPLC hasn’t “been asked to get involved” and noted that he highlighted some of the ways “offensive April Fool’s humor can backfire” in this April 7 post before The Medium’s story made the news.

LoMonte told iMediaEthics that SPLC doesn’t recommend student journalists put a ban on satire, but that it does warn about “certain taboo topics — sexual assault is one, and Hitler and the Holocaust are others — that simply ought to be avoided.”

LoMonte told us that The Medium should resolve this incident by apologizing.  He wrote to iMediaEthics:

“This wasn’t a smart idea, and the editors should apologize and should consider limiting their ridicule in the future to higher-profile public figures who really ‘have it coming.’ Having said that, an apology and retraction is probably where it should stop. The First Amendment does protect satire and parody, and given that The Medium is known to be a publication of outlandish humor, it is unlikely that anyone reading it really thought they were reading the sentiments of Aaron Marcus.”

We have written to the Daily Targum for comment and will update with any response.