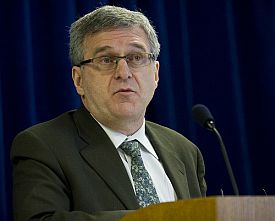 Stephen J.A. Ward, pictured above, is the director of the Center for Journalism Ethics. Ward calls sites like WikiLeaks to create a code of ethics. (Credit: UW Ethics photostream, Flickr)

Stephen J.A. Ward called for WikiLeaks and other “whistleblower” sites to establish some form of ethics code.  He explained his concerns and call in the article, “How to Reveal Secrets,” published on The Canadian Journalism Project Aug 24.

Ward is a journalism ethics professor at the University of Wisconsin-Madison, the founding chair of the Canadian Association of Journalists’ ethics advisory committee and the director of the Center for Journalism Ethics.

Noting that Wikileaks’s publication of secret Afghan War documents “sparked an ethics firestorm,”  Ward wrote that WikiLeaks is a blend of old and new media.  In fact, it’s such a blend that when the Afghan documents were published, many in the media and public didn’t know how to treat WikiLeaks — is it a source or a news agency?

A further case in point: analyses of the Afghan War documents were published concurrently by major newspapers The New York Times, Der Spiegel, and The Guardian through the collaboration of new media (WikiLeaks) with old media (the newspapers).

Because WikiLeaks is operated in numerous countries and has established safeguards to prevent a government from shutting it down or censoring it, Ward concluded that WikiLeaks has political power.

Morally, however, WikiLeaks has an ethical problem, according to Ward.  The site holds moral power, yet Ward can’t discern how the site weighs moral decisions.  Where many journalists voluntarily abide by a code of ethics (whether it be the U.S. Society of Professional Journalists’, the UK National Union of Journalists‘ or so on), WikiLeaks and whistleblower sites are seemingly without such ethical guidelines.

“Wikileaks is seen by many as an Internet cowboy on a white horse, fighting the dark forces of censorship, corruption, and military secrecy,” Ward explained.  “It celebrates the Internet’s love of free voices and combines it with a journalist’s hatred of secrecy.”  But, what are WikiLeaks’ ethics and standards?

In order to determine what some of WikiLeaks’ ethics may be, Ward listed numerous questions he has for WikiLeaks, including:

Further, Ward clarified he’s not necessarily against WikiLeaks, but that he sees the need for “open and responsible ethical policies.”  Likewise, in the media, he wrote “We need a serious debate on the ethics of secrecy.”  How does the media report secret information and what codes or rules guide those reporting decisions?

He wrote that while it’s important for newsrooms to decide their ethical policies when it comes to the publication of secret documents, it’s more important to “critically challenge these sites about their ethics.”

Ward also wondered how newsrooms can work with sites like WikiLeaks.  He wrote that “rules of collaboration should be no different from the rules for using data from any external source.”

For example, newsrooms should be certain to independently verify data and have editorial freedoms.  Journalists should “balance truth telling and minimizing harm” when dealing with data like the Afghan documents.

iMediaEthics has previously written about WikiLeaks as an organization and specifically on the Afghan War documents here.

iMediaEthics has again written to WikiLeaks for more information and will update with any response.