Journalist and University Ethics Lecturer Writes Profile on Top Cop...while having affair with him?

Journalist and University Ethics Lecturer Writes Profile on Top Cop…while having affair with him? 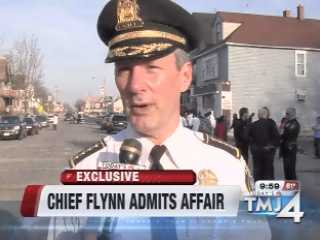 Milwaukee's married top cop confesses he was having an affair. He didn't mention that the fling was with a married journalist who recently wrote a flattering profile about the chief for Milwaukee Magazine.

What will the University of Wisconsin, Milwaukee Journalism and Mass Communication department do in light of the scandal involving the very public violation of ethics by their ethics lecturer?

Daniel Bice, the Milwaukee Journal Sentinel, broke the story that one of UW-Milwaukee journalism lecturers, Jessica McBride, a “prominent local journalist” who teaches media ethics there, has admitted to having an affair with the Milwaukee Police Chief, Ed Flynn, that she just profiled in the May issue of Milwaukee Magazine. Bice wrote “McBride has taught ethics as part of her journalism classes at UWM.”

Blogger, Dan Cody writes, “The biggest issue here outside of the personal stuff is the fact that McBride lectures about journalism and ethics at UW Milwaukee. I don’t know how you can have someone teaching about ethics in journalism when that person has violated the very ethics they’re trying to teach about, but that’s the decision of the UW Milwaukee.”

Beyond the case we recently covered regarding the Los Angeles Mayor’s affairs with two journalists, an especially dark cloud of perceived, if not actual conflict of interest, arises here in this affair as she wrote an exceedingly flattering profile about the chief at the same time, as emails found by the Sentinel suggest, a romantic involvement was afoot. McBride has since denied this charge and claims the affair started “long after” the article.

True or not, Freud would have a field day with a retrospective examination of McBride’s profile of the police chief. Blogs like, Brew City Brawler, have selected particularly salient quotes from McBride’s article, titled, “The Cop Who Can’t Stop.”

Brew City Brawler writes, “Attention journalism students. As Jessica McBride demonstrates in her profile of Police Chief Ed Flynn for Milwaukee Magazine, write what you know: ‘ Flynn is also a compelling physical presence: tall, iron-haired, fit (he once rode a bicycle 233 miles) and energetic. He has what one observer calls ‘command bearing.’”

The blog also suggests that other passages were “weird” when read with the advantage of 20/20 hindsight.

McBride writes: “Questions still linger about Flynn’s past. And his commitment to Milwaukee. The Music Man always left town – until he fell in love. More than one year after taking the job, Flynn’s wife still lives in Virginia, while he lives alone in a Downtown condo. Could he finally settle down here? Milwaukee Lieutenant of Detectives John Hagen loves the new chief, but has no doubt Flynn’s star shines too brightly for a long marriage to Milwaukee. ‘It’s like Billy Bob Thornton and Angelina Jolie,’ Hagen says. ‘Eventually, she leaves him, and is anyone really surprised? I mean, she’s Angelina Jolie and he’s Billy Bob Thornton.’ ”

It should be noted for accessing damage that McBride is also married. (McBride mate is former Waukesha County District Attorney Paul Bucher–a fact that will soon become more relevant).

Given that McBride interviewed Flynn’s wife and son for the profile and even uses quotes, Brew City Brawler points out that this makes the situation–to use his words– “more bizarre.”

Bice, the Sentinel reporter who unearthed the affair, states, correctly, that “Reporters are strictly forbidden from writing about individuals with whom they have strong personal ties.” Bice writes that McBride, “who worked at the Journal Sentinel full time from 1994 to 2004” also “supervises an online student publication that writes regularly about the Milwaukee Police Department” –making the conflict of interest even deeper.

However, here is the kicker. Bice reveals, “During her stint at the Journal Sentinel, McBride worked in the Waukesha bureau and later moved to the downtown newsroom, where she covered the Milwaukee Police Department. When editors learned that she was dating Bucher, McBride was precluded by the company’s ethics policy from covering stories involving the prosecutor, according to Journal Sentinel Editor Martin Kaiser.”

Brawler explains: “When the Brawler read Jessica McBride’s profile of Ed Flynn, it reminded him of something. Then he remembered what it was: A 14-year-old profile of Paul Bucher.”

The blog compares passages and headlines from the two profiles–one of her now husband, Paul Bucher (Headline: ‘Oswald prosecutor has reputation of being aggressive, hardworking.’) and the recent one about Chief Flynn (Headline for the Milwaukee Magazine piece: The Cop Who Can’t Stop.).”

So in light of the facts, what will the UW journalism department do? We called Bice to ask what he thought and are waiting for comment. Bice wrote in his piece: “Paul Brewer, the head of UWM’s Journalism and Mass Communications Department, declined to comment on the situation, saying he knew nothing about it.”

StinkyJournalism also called the UW journalism department for comment and was told “for now, none are being made.” They suggested we leave a message for the Dean, which we did. We will update readers with any new information.

UPDATE: 06/23/09:  Paul Brewer, who Bice described as the head of UWM’s Journalism and Mass Communications Department, returned StinkyJournalism’s Friday calls. He said that he “can’t comment on personnel matters” when asked about what they planned to do about McBride’s role there.

When I indirectly suggested that the fact of whether or not someone was employed at a state institution would be public information, he said “public records requests can be made” and I could also call the university press office.

I asked Brewer if he could verify if McBride supervises students for an online publication whose beat includes the police department, as reported. He said “you can read the read site as easily as I can.”

Brewer also refused to say whether ethics were taught outside the one course titled “Media Ethics.” He underscored the ethics class was never taught by McBride. “I don’t have the syllabus so I can’t comment on the content of her courses” he said.

Since Bice reported, “McBride has taught ethics as part of her journalism classes at UWM,” I asked Brewer if there were any other errors in Bice’s report. He quickly corrected me, to say that he was not claiming Bice made errors. He hesitated, then added that he was “not confirming anything he said either.”

“It must be fair to say,” I asked, “that ethics as a topic comes up and is a component of other courses and won’t be compartmentalized to only being discussed in the one ethics course?”  He said, “I don’t go around to all the lectures, and I don’t have the syllabi in front of me so I can’t specifically comment on that.”

Perhaps given this debacle, Brewer better get up to speed about where and how much ethics are taught in his department since he does not seem to know.

Journalist and University Ethics Lecturer Writes Profile on Top Cop…while having affair with him?