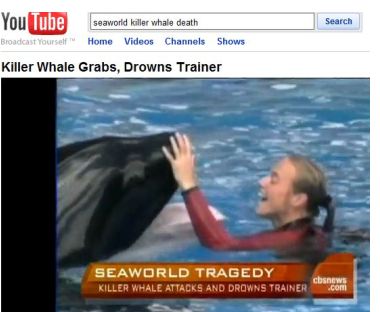 Screen capture from a CBS News report posted on YouTube

A Florida judge heard arguments today regarding the release of SeaWorld’s footage of trainer Dawn Brancheau’s death, but there is still no verdict as to what will happen to the footage, according to the Orlando Sentinel. Brancheau died at SeaWorld Orlando Feb. 24 when the killer whale Tilikum grabbed her by the ponytail and pulled her into the tank, drowning her.

The AP reported the hearing lasted less than an hour and Jon Mills, the attorney for Dawn Brancheau’s family, asked for the footage to be permanently sealed to the public. Under Florida public records law, once the investigation is over, the media gets access to the tape.

On one side is Brancheau’s family and SeaWorld, both asking for the footage to be kept from the public and media.  SeaWorld’s representative, Gregory Herbert, argued against releasing the footage for the following reasons: “SeaWorld has the standing to assert her rights as Brancheau’s former employer, SeaWorld has been assigned rights for right of publicity and SeaWorld is the owner of the copyright of the video.”

On the other side, Rachel Fugate, representing various media outlets including the Orlando Sentinel, requested the release of the footage to the media.  Fugate offered a possible solution to the concern of the video becoming viral:  The Orlando Sentinel reported she suggested the media could see but not publish the tape.

WESH-2 TV reported that Fugate said “it allows media organizations to provide information to citizens without invading the privacy of the Brancheau family.”

And, while the Brancheau family’s request for privacy is understandable, SeaWorld’s request to privatize the video is not so much.

As StinkyJournalism reported over the weekend, SeaWorld has a clear conflict of interests in keeping the footage private and away from media speculation.  The whale that killed Brancheau is responsible for, or associated with, two other deaths, and is reported  to still be a part of SeaWorld shows.

More reason to make the footage public comes from Ric O’Barry, the trainer of the famous dolphin Flipper.  Entertainment Weekly reported that Ric O’Barry, who was also featured in the recent documentary “The Cove,” criticized SeaWorld last month.

“SeaWorld allowed public and trainer contact with an orca that was a known risk, and after 3 deaths they’re suggesting that it actually continue,” Entertainment Weekly reports Ric O’Barry said.  “SeaWorld has been admonished in the past by an official with the US National Marine Fisheries Service for failure to take prudent and precautionary steps with Tilicum’s health and welfare.  The latest claims that Tilicum was distracted by the trainer’s ponytail are absurd and force us to infer that SeaWorld is guilty of negligence and that it is now trying to cover up repeated deadly orca attacks by resorting to outrageous and disingenuous claims.”

The Palm Beach Post reported that a day after Wednesday’s hearing, the judge continued the temporary injunction on SeaWorld’s footage and that “attorneys representing the media and the family of SeaWorld Orlando trainer killed by a whale will start negotiating soon some agreement on the access to videos and pictures that depict Dawn Brancheau’s death.”