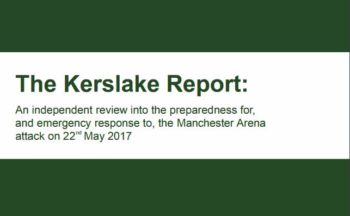 Did UK media ethically report on the Manchester bombing at the Ariana Grande concert last year? The May 2017 suicide bombing killed 22 and injured more than 100.

According to the Kerslake Report, which looked at “the preparedness for, and emergency response to” the attack and addressed media coverage, there is room for improvement. The report, set up by Greater Manchester mayor Andy Burnham in the wake of the bomb, “seeks to identify both the strengths and weaknesses in how the disaster was tackled,” according to the Manchester Evening News.

The report found that “most participants who commented on their experience of the media in the attack aftermath were negative,” with people saying they were “hounded” and “bombarded.” Families at the hospital said reporters “wouldn’t take no for an answer.” The report’s section on media didn’t name names for which reporters or news outlets upset victims’ families.

One family even said that a reporter was the first to tell them about the death of their son, according to their report. The BBC reported the details, noting that the deceased’s mother, Figen Murray, said she found she was “listened to” and “reassured” by the report. Murray explained a reporter broke the news of her 22-year-old son Martyn Hett’s death to her 16-year-old daughter, and “to put a young person in that position is unforgivable, it’s totally unethical.”

In addition, the report found “at least two examples of impersonation” where families believed journalists were posing as a nurse and a police officer, respectively.

Other complaints by families included:

As iMediaEthics previously reported, one error in reporting on the attack was the false claim that a girl was missing during the attack. The Daily Star published a photo of a 13-year-old girl it identified as Lucy Cross and said was missing, but the girl’s name isn’t Lucy Cross and the girl was home with her family during the attack. The girl’s mother complained to the press regulator the Independent Press Standards Organisation about the error and obtained an apology.

The report did note that “a number of families spoke in praise of sympathetic reporting by the Manchester Evening News and other papers local to the bereaved.”

iMediaEthics asked IPSO about the report’s findings. A spokesperson pointed iMediaEthics to IPSO’s statement from its chief executive Matt Tee reminding journalists are to “approach bereaved family members with sympathy and discretion,” be accurate, and do not invade privacy. He added, “we will be looking at what more we can do to support victims, families and the agencies that work with them as well as making sure that IPSO-regulated publishers are aware of their obligations and responsibilities under the Editors’ Code of Practice.”

In a separate blogpost, Tee reminded that IPSO “has a 24 hour harassment helpline” and can issue “private advisory notices” to “warn that a particular individual or family does not wish to talk to journalists.”