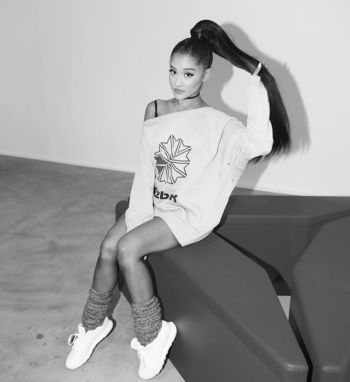 In the panic after the Manchester bombing attack at an Ariana Grande concert earlier this year, which killed 22 and injured more than 100, many people were searching for their loved ones who were lost in the crowd or feared dead. But, the Daily Star wrongly pictured a 13-year-old girl, identified as Lucy Cross, as among the missing, when she was thankfully at home safe with her family.

The Star published photos of the dead and missing on its front page and on page 4 in their May 22 issue. Among these was a photo of the girl identified as Cross, stating “MISSING: Lucy Cross.” Pauline Gorman, the mother of the girl photographed, complained to the press regulator the Independent Press Standards Organisation about the trauma she suffered from seeing her daughter’s photo on the front page amidst the dead and missing.

Her daughter isn’t named Lucy Cross, either; her daughter’s photo had been circulated on a fake social media account of the missing and dead from the concert. Lucy Cross is likely a made up name, IPSO told iMediaEthics. The Star had found the photo on a Twitter account with the name Lucy Cross given, and believed it to be real. iMediaEthics contacted IPSO to ask if Gorman has any other ongoing complaints regarding any other outlets making the same error. An IPSO spokesperson told iMediaEthics, “Ms Gorman did make other complaints but they were resolved by the publications directly so no IPSO rulings.”

After Gorman complained, the Star published a front-page note and page 2 apology for having caused “upset and distress.” The May 25 apology read:

“In yesterday’s edition we published a picture of Lucy Cross on the front page and page 4 and we referred to her as missing in the Manchester attack. Unfortunately we got the picture and information wrong. The picture was of Niamh Bishop whose details were appropriated and used to make a fake social media account. Niamh was not at Manchester Arena at the time of the attack and was not missing. We apologise to Niamh and her family for the upset and distress we have caused.”

Below, see a screenshot of the apology, via Press Reader. 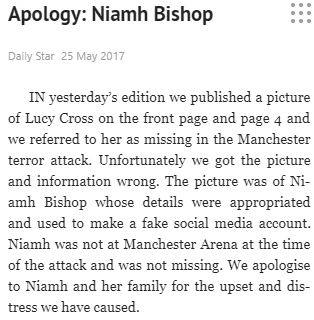 The Daily Star apologized after showing a photo of the wrong person in a photo spread of Manchester bombing victims and missing (Credit: Press Reader)

IPSO ruled that the apology and correction were good steps, but still ruled against the paper for having published information “related to the welfare of a child, in an article that identified individuals who were missing or dead following the attack.” As such, the Star had to publish a ruling against it in the first four pages of the print edition.

iMediaEthics has written to the Star to ask for its response to the ruling.