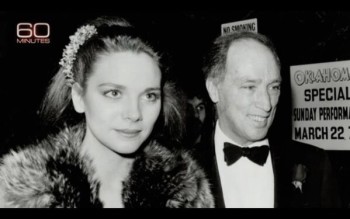 60 Minutes used this 1981 Toronto Star photo of Kim Cattrall and Pierre Trudeau instead of a photo of Pierre and Margaret Trudeau.

Is Sex and the City actress Kim Cattrall the mother of Canadian Prime Minister Justin Trudeau? If you watched CBS News’ 60 Minutes this weekend, you might have gotten that impression.

“60 Minutes showed a photo of Cattrall with Trudeau’s father Pierre Trudeau in 1981 during its segment on the prime minister,” The Hollywood Reporter reported.

“Cattrall did date the late Pierre Elliot Trudeau after his separation from Margaret Trudeau,” according to the Canadian Broadcasting Corp. The photo in question was taken by Toronto Star photographer Dick Darrell, the Star reported, when Cattrall was 24 and Trudeau 61.

“We regret the error on one of the several video and still images shown of Margaret Trudeau. It was corrected online Sunday night,” a 60 Minutes spokesperson said in a statement sent to iMediaEthics, that was also sent to The Hollywood Reporter.

Cattrall tweeted about the 60 Minutes error, writing “I have a son who is the Prime Minister of Canada? I couldn’t b more proud.”

'@60Minutes I have a son who is the Prime Minister of Canada? I couldn't b more proud. @CBCTheNational pic.twitter.com/EiqzzJJjOl

'@hey_kot The Queen is NOT Canadian. Wait a minute! Maybe she is..It's been a confusing day. pic.twitter.com/ZMdHuErtbW

iMediaEthics has written to Justin Trudeau’s office for comment on the error.