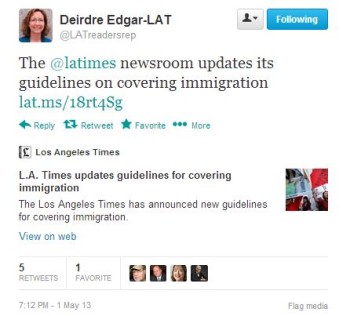 The Los Angeles Times is the latest news organization to update its standards for how it reports on immigration.  According to the Times, the newspaper plans on handling descriptions with “a careful, case-by-case approach” that is “fair, nuanced and precise.”

As iMediaEthics has written, the Associated Press announced last month it wouldn’t use the term “illegal immigrant” any longer and wanted journalist to be descriptive about people’s circumstances.  Likewise, USA Today announced it would only use “illegal immigrant” if it was in direct quotes. Advocates, including the National Association of Hispanic Journalists, had been calling for the change since 2006.

In a May 1 report tweeted by Jim Romenesko, Los Angeles Times readers representative Deirdre Edgar announced the newspaper would stop using the term “illegal immigrants” and “undocumented immigrants” because neither are specific enough to be accurate.

As with the AP, the Los Angeles Times said it’s OK to write “illegal immigration” and still bars the use of “illegal alien” and “illegals.”  According to a Times memo Edgar published:

“‘Illegal immigrants’ is overly broad and does not accurately apply in every situation. The alternative suggested by the 1995 guidelines, ‘undocumented immigrants,’ similarly falls short of our goal of precision. It is also untrue in many cases, as with immigrants who possess passports or other documentation but lack valid visas.”

Edgar said the newspaper is already starting to follow the new guidance, pointing to a few Los Angeles Times articles where the term “illegal immigrant” is avoided. “Though this is a change in written guidelines, the philosophy is already in practice in The Times,” Edgar wrote.

The New York Times also announced a change in its standards for immigration recently.

According to an April 23 news report on the Times website, the Times is suggesting journalists “consider alternatives” to “illegal immigrant,” which is still permissible.

The full style entry is published on Poynter’s website.  Describing the term “illegal immigrant” as sometimes “loaded or offensive,” the entry reads in part:

“illegal immigrant may be used to describe someone who enters, lives in or works in the United States without proper legal authorization. But be aware that in the debate over immigration, some people view it as loaded or offensive. Without taking sides or resorting to euphemism, consider alternatives when appropriate to explain the specific circumstances of the person in question, or to focus on actions: who crossed the border illegally; who overstayed a visa; who is not authorized to work in this country.

“Unauthorized is also an acceptable description, though it has a bureaucratic tone. Undocumented is the term preferred by many immigrants and their advocates, but it has a flavor of euphemism and should be used with caution outside quotations.”

Further reporters are advised against the word “illegal as a noun” and “the sinister-sounding ‘alien’.”

The New York Times noted that the announcement was made the same day as a protest and petition with “more than 70,000 signatures” about the term at the newspaper’s headquarters.

Check out all of iMediaEthics’ stories on immigration.