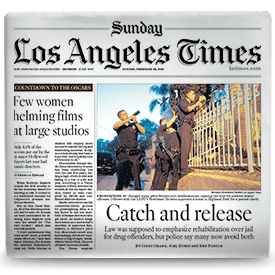 The Los Angeles Times was ordered by a federal judge, U.S. District Judge John Walter, to delete information from an article about a police detective taking a plea deal, the Times itself revealed.

“The agreement was supposed to have been filed under seal, but it was mistakenly made available on PACER, a public online database for federal court documents,” the Times explained in a news story.

The article reported on detective John Saro Balian’s guilty pleas to charges of lying to federal investigators about his links to organized crime, accept[ing] a bribe and obstruct[ing] justice by tipping off a top criminal target about an upcoming federal raid, helping him avoid arrest.”

The Times did make the changes but executive editor Norman Pearlstine said he thinks “The judge’s order clearly violates the 1st Amendment…. We expect that the judge’s order will be vacated on appeal, and we will publish the information.”

“Preventing journalists from publishing information they obtained lawfully violates the 1st Amendment. We believe that once material is in the public record, it is proper and appropriate to publish it if it is in the public’s interest. We are asking that the order be immediately vacated.”

The July 14 article in question was headlined, “Glendale police detective pleads guilty to obstruction, lying to feds about ties to organized crime.” It now carries a note reading:

“This story has been updated to remove references from the filed plea agreement, which was ordered sealed by a judge but publicly available Friday on the federal court’s online document database. The changes were made to comply with an order issued Saturday by a U.S. federal judge. The Times plans to challenge the order.”

iMediaEthics has written to Balian’s attorney for comment about the ruling.