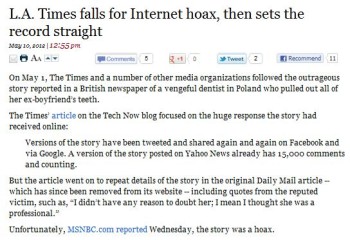 Los Angeles Times readers represenative Deirdre Edgar pointed out that the newspaper reported a hoax story as fact in a May 10 blogpost.

As we have written, the Los Angeles Times was one of many outlets to re-report the Daily Mail’s story that a Polish dentist yanked out all of her ex’s teeth after he broke up with her. Edgar noted that the Los Angeles Times reported that the story was a hoax in a follow-up story and also ran a correction on its original report noting that the story was a hoax..

The follow-up report read in part:

“No doubt, journalism watchdogs will rightfully point to the episode as a cautionary tale of what can happen when journalists like me are sitting at a keyboard, trying to keep up with fast-breaking news and a 24-hour news cycle that just doesn’t quit.  Kudos to MSNBC for taking the time and making the effort to follow the story behind the story. No matter how fast the news is breaking, there’s always time to find out the truth.”