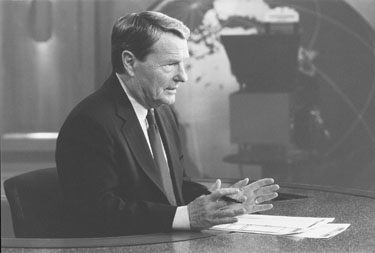 If there were any worries that a new redesigned, more Web-connected PBS NewsHour (no longer “With Jim Lehrer“) might lose some of its journalistic clout, Jim Lehrer himself is here to tell us all is well.

At the close of December 4’s broadcast, the veteran newsman told viewers straight-out that while changes are afoot, the core journalistic values of the program will remain staunchly the same. “Now it’s time for another title change, as we confront the challenges ahead. But I promise you, one thing is never going to change. And that’s our mission,” Lehrer says. (Video available here)

At the heart of the NewsHour’s mission, Lehrer explains, are a list of guidelines for what he calls “MacNeil/Lehrer journalism.”

Reading straight from a printed sheet, Lehrer lists the principles:

-Do nothing I cannot defend.
-Cover, write and present every story with the care I would want if the story were about me.
-Assume there is at least one other side or version to every story.
-Assume the viewer is as smart and as caring and as good a person as I am.
-Assume the same about all people on whom I report.
-Assume personal lives are a private matter, until a legitimate turn in the story absolutely mandates otherwise.
-Carefully separate opinion and analysis from straight news stories, and clearly label everything.
-Do not use anonymous sources or blind quotes, except on rare and monumental occasions.
-No one should ever be allowed to attack another anonymously.
-And, finally, I am not in the entertainment business.

The New York Times covered the upcoming changes in Lehrer’s program, discussing how the new-NewsHour will boast an integrated broadcast and Web staff, a new Website, more blogging, Web-specific video, and eventually material that will be iphone-adaptable.

All of this has a double-edged potential–either to improve or to dilute the NewsHour’s acclaimed programming. But as long as the principles Lehrer read out last Friday hold true, it appears as though they have ethics thoroughly covered.

Check out a video (and transcript) of Lehrer’s explanation of changes here.