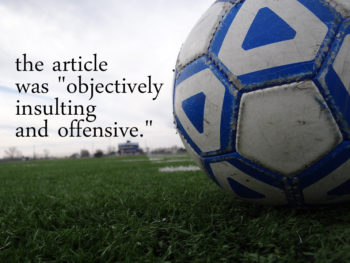 La Razon‘s opinion article by Alfonso Ussia suggested Messi “wore a wig and used the performance-enhancing drug Nandrolone,” the Mirror reported. ESPN noted that Messi did have hormone treatments at 13 (because of a growth hormone deficiency) but “this treatment did not breach regulations” and Messi “has never failed a doping test over the course of his career.”

“The Audiencia Provincial de Barcelona court found that the article went outside the bounds of an opinion piece and ruled that La Razon, its editor Francisco Marhuenda and Ussia must pay €64,590.79 to the player,” ESPN reported.

Messi, who plays for the Barcelona soccer club, is donating the money to Doctors Without Borders, ESPN reported.

The court ruled, according to a Google Translate of Sport.es, the article was “objectively insulting and offensive.” What was said in the La Razon article was “unnecessary and impertinent.”

This doesn’t end Messi’s time in court over news coverage, though. “Messi is also in midst of a lawsuit against another Spanish newspaper, El Confidential, for linking him to tax evasion claims in the leaked Panama Papers,” Sports Illustrated reported. “Prosecutors claim Messi and his father avoided paying taxes on his image rights from 2007 to 2009.”

La Razon apologized last year after it used a doctored photo of Canadian Sikh man Veerender Jubbal on its front page and falsely linked him to the Paris terrorist attacks.

iMediaEthics has written to La Razon for further comment.