Veerender Jubbal Responds to Fake Photo of Him, Doctored to Link him to Paris Attacks - iMediaEthics 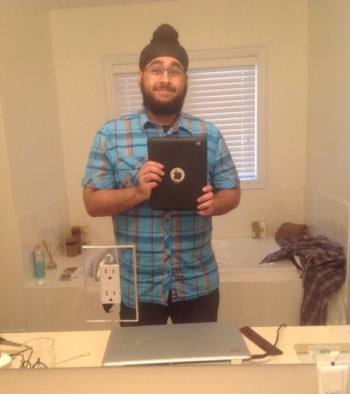 Veerender Jubbal posted on Twitter this picture back in August. Someone Photoshopped it to add a suicide vest and alter his iPad to look like a Koran.

Veerender Jubbal, the Canadian Sikh man who was falsely identified as one of the terrorists behind the Paris attacks after a Photoshopped image of him made the rounds, called for all media outlets that shared or published the fake photo of him to retract the harmful claims.

As iMediaEthics previously reported, the Madrid newspaper La Razon published the doctored photo of Jubbal on its front page, linking him to the attacks in Paris on November 13. The original image of Jubbal, which he posted on Twitter in August, was a selfie of him holding an iPad. The fake photo edited that picture to add a suicide vest and change his iPad to look like a copy of The Koran.

In a media statement that Jubbal just e-mailed iMediaEthics, posted on the Sikh Coalition website, Jubbal called for media outlets to “learn and educate their readers about the Sikh faith” as a result of this incident. Forced to defend himself after being accused of terrorism, Jubbal wrote, “Let me be clear – the photograph is a fake and I am not affiliated with terrorism of any kind.” Jubbal rightly called the Photoshopping a “despicable action” that was “quickly made worse” after the media shared the image.

He wrote in part:

“While the past 48 hours have been deeply disturbing on a personal level, the broader impact of this image going viral for the Sikh community is what upsets me the most. Sikh articles of faith, such as our turbans and beards, represent a commitment to universal justice, equality, and helping others (seva), yet Sikhs continue to be mistakenly and offensively associated with terrorist networks abroad. The Sikh community has faced significant violence and discrimination following major terrorist attacks because of our religious appearance. We must be better than this.”

Jubbal went on, “When we paint entire faiths and communities with the same brushstroke, we further give terrorists exactly what they want. We’re strongest in the face of terror and bigotry when we stand together. This false image is an opportunity for all of us to hopefully grow together in our shared understanding for one another.”

Jubbal’s statement noted he won’t be doing media interviews at this time.

Why Did Australian Newspaper publish Candidate's Address with Letter to the Editor?